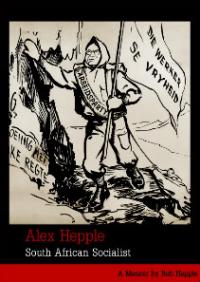 Alexander Hepple (1904 - 83) was a Member of Parliament (1948 - 58) and Leader of the South African Labour Party who became the voice of the voteless black majority in the white parliament, at every turn campaigning for democracy and human rights in the increasingly totalitarian apartheid state. At the request of ANC leaders he took the initiative in founding, and becoming chairman of the Treason Trial Defence Fund (1956-61) and the SA Defence and Aid Fund (1960-64). He gave unstinting advice and support to the non-racial trade unions. With his wife Josephine (Girlie) Zwarenstein (1906-92), who was his close comrade in all his activities, he refounded the Labour newspaper Forwardand established in London the International Defence and Aid Fund’s Information Service which helped to expose the evils of apartheid and repression to the wider world.

In this memoir, their son, Bob Hepple (b 1934) relates the previously untold story of Alex’s and Girlie’s lives and their struggle for a democratic non-racial socialist South Africa.

The book, drawing on the personal correspondence, writings and speeches of Alex Hepple, casts a new personal light on the class struggles of white workers in the 1913 and 1922 strikes, the influence of the ideas of democratic socialism, the struggle of progressives in the Labour Party to liberalise its racial policies, and the divisions within the white unions that enabled the Broederbond-Nationalists to destroy effective trade unionism. It also demonstrates the courage and resilience of those who resisted and exposed the cruelties and political repression that accompanied apartheid.

The book will be essential reading for all those interested in the history of socialism, of trade unions, and of a previously neglected aspect of the early years of the anti- apartheid struggle.