From the book: Le Rona Re Batho (An account of the 1982 Maseru Massacre) by Phyllis Naidoo, South Africa, 1992

The Last Supper is a painful story in Christian circles. Pictures of the Last Supper grace the walls of millions of homes throughout the Christian world. Jesus, aware of his impending betrayal ate this his last meal with his disciples, one of whom would later betray him. That supper was an extremely difficult one in preparation of CERTAIN death.

The last meal before, the certain death of execution is usually a slap-up affair. The South African variety includes deboned chicken. In some parts of the then British Empire, the last meal was served with greetings from his/her majesty. I doubt if anyone awaiting execution could eat a meal at Royal invitation or otherwise. It is sadistic or a bizarre sense of humour on the part of the execution authorities of any State. It is certainly not done in the interests of the condemned and most certainly not at his/her request. 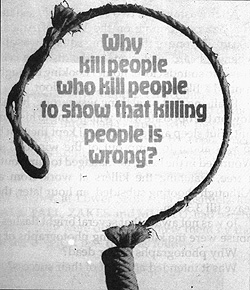 The Church Council and Corrections - Canada

But the last supper of my story was had by all, 42 in number, in and around Maseru, Lesotho, without any notice of death, a trial, premonition or otherwise of death that was to follow. Certainly we were to be betrayed by erstwhile comrades, now turned agents of the regime.

Dinner, on this fateful night, in this particular household, in Lower Seoli, Ha Masithela, consisted of rice, meat, potatoes and salads. A fare usually had after monthly - pay out time by the UNHRC. Yes, all 5 were refugees and their allowance at the time was R40.00 per month. Housing was provided by the Lesotho government, and in some cases by the ANC. Those refugees lucky enough to find employment in impoverished Lesotho housed themselves.

Payout days would find most refugees in supermarkets buying meat etc, or paying for Levi Jeans or for a pair of those fancy shoes or at Lesotho's main watering hole was usually broke thereafter and scrounged for the rest of the month. Most were teenagers who had never worked or never had to deal with money on a regular basis. The notion of budgeting was unknown. Some refugees were schoolchildren as young as 10 years who were in the loving care of Canon John Osmers.

The particular dinner averred to above was intended to impress two Basotho lady friends who were invited to share a meal with our lads. After dinner ice - cream was served a happy meal and ended around midnight. There was much fun and laughter and it seemed the ladies were suitably impressed. The lads paired off to their rooms, leaving 3 exiles in the kitchen to clear up.

After washing up, two comrades turned in, but Jo listened to a jazz programme on the Voice of America from 12.00 - 1.00am. Jo, one of the cleaning squad, was about to go to bed when he heard explosions in the distance. His attention was drawn to sounds closer home. Looking through the window he spotted a Black man at the kitchen door.

Realising that something was wrong, he made for the window on the opposite wall, whispering to his comrades to follow suit. But sleep and a good meal kept them in bed, asleep. As Jo was about to jump out of the window, shooting began. Wounded in the head, he managed to jump out and hide under a tree, watching the killers at work from a distance. Although shooting subsided an hour later, the killers did not leave till 3.30am.

Jo was not aware that several bright flashes in his darkened house were the killers taking photographs of the dead.

Why photographs of our dead?

Was it intended as proof of their success?

Or possibly these photographs are used to update TERRORIST ALBUMS, the Special Branch show to the detained in their custody to jog their memories.

From time to time these are updated, like adverts for property marked SOLD. Perhaps, they, the special branch would in bold writing across the photograph say KILLED IN MASERU - 9.12.1982. Or perhaps they won't, to ascertain whether the detained person is aware of their deaths. This information will tell how informed the detainee is.

The bombers, boarding kombis, left in the direction of David's home - another refugee. His bullet-punctured body was also found the next morning. 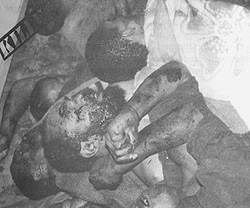 On checking the house later, Jo found 4 of his comrades dead and the two ladies injured - All had been his guests to dinner a few hours before. These three had escaped with their lives. A concerned Mosotho took them to the hospital for treatment neighbour in his Kombi, leaving their dead comrades behind.

That, their last supper, at Lower Seoli - Ha Masithela for KHANYILE, WALK TALL, ZAKES and MUNTU, had barely been digested before they were dead. We knew them by the above names but the UNHCR lists them as follows:

No photographs of comrades massacred in Maseru or elseÂ­where hang on the walls of any ANC offices in the country since its unbanning. Perhaps they have been consigned to our archives. Perhaps some zealous department has kept a record of those who died in exile and by now perhaps these have been collated and we have a complete list of this 'statistic'. I hope so. 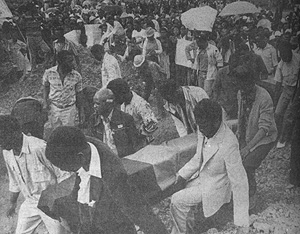 The collective memory of the movement has wiped out the memory of these and other comrades. We are extremely proficient at burying our dead. Most of us attend funerals. It was a great meeting time especially since gatherings of exile were taboo. The South African securities were in Maseru from time to time and vigilance was an important component of our lives. We buried our dead comrades. We shared a meal together and renewed old acquaintances. Death brought us together into one family.

Time has obliterated 30 comrades and 12 Basothos from our collective memory. The exigencies of the present take up time energy and resources - scarce commodities in the ANC.

However, I wanted to bring these comrades to you, to stain them into our national memory. It will be the 10th anniversary of their deaths on the 9 December 1992. Ten long years since so many have our glorious youth were snuffed out of their politic existence. All their dreams for a democratic South Africa shot and bombed in a few seconds.