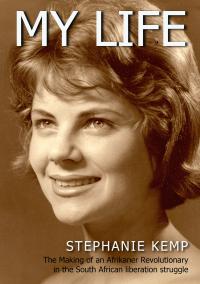 Stephanie Kemp, She was born in the Karoo in a conservative Afrikaner Nationalists family. After completing her matric in Port Elizabeth went on to study Physiotherapy at the University of Cape Town (UCT) in 1960. She became political active and was recruited into the then banned South African Communists Party. Stephanie Kemp was one of the first women member of the underground South African Communists Party to be arrested in the wake of the launch of the armed struggle in 1961. On her release from prison in 1966 she fled the country. In exile she married fellow exiled activists Albie Sachs and played a key role in the underground SACP leadership structures in the UK. She returned to South Africa after the unbanning of the liberation organizations.

This book is a candid account of the history or histories of our liberation struggle. It tells vignettes of the life of the early Kemps, and the home life of the contemporary Kemps. But it is a story of women in our liberation struggle from the perspective of a white Afrikaner revolutionary. Cde Stephanie Kemp is up there among the Bram Fischers, the Breyten Breytenbachs – and today Stephanie Kemp is counted among them! This is a book that women cadres in our Movement should read, and one that young students and activists must absorb. At a time when our country is confused about race, Stephanie Kemp will always be a name to remember.

South Africans and readers of this book will find Stephanie Kemp an enigma till the end. What exactly and how, did she end up the way she has? As a young student activist in the 1960s, I remembered being very curious about the young white students who were arrested following the Park Station bombing and the execution of Harris. We were very familiar with the security police repression in the townships, but the activism of young white students to this extent caused us much excitement. But more curious still, among them was a young Afrikaner woman, Stephanie Kemp. I remember how the newspapers made much of this, especially how she was viewed as a traitor. I also remember when she was sentenced, and the “bargaining” that Prime Minister John Vorster was seeking to make political mileage out, but it led to her early release. The inside of that story is told in this book.