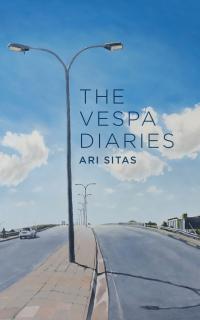 Vespa Diaries started as a scrapbook of impressionist splashes: a journey through the new South Africa, fifteen years after the transition. I started thinking that I could squeeze every inch of this country into my saddle-bag. But Marikana happened in 2012 and the dead refused to return to work. So what was to be a playful allusion to Motorcycle Diaries turned to anger and to an expressionist disquiet. — Ari Sitas, 2015

There is a restlessness and constant travel in Ari’s verse. The text has echoes of prior work by others – Dharma Bums, A Season in Paradise, House of Hunger come to mind but like any other of his works it stands on its own feet: exceedingly private, enticingly public. Following him on his fake Vespa from Cape Town to Musina and back and through every province and side-street, talking, arguing and shouting is quite a treat. He needs no introduction: an accomplished poet, sociologist, activist, leader and spirit of disquiet. He has taught us Durban, he has taken us to Cyprus, Ethiopia and India. Now he is rushing us through every nook and cranny of Mzansi, blending history and the future in new ways. It is more than a journey, it is about a quest for what has remained as hope.