The son of a successful builder, Turner was born in Cape Town on  September 25th 1941, he grew up in Stellenbosch and completed an Honours degree  in philosophy at the University of Cape Town in 1963.

In 1966 he earned a doctorate at the Sorbonne with a thesis on the political philosophy of Jean Paul Sartre. Observing the nascent French student movement convinced him that students could wield genuine power. He returned to South Africa and took up a series of teaching posts before moving to the University of Natal in 1970. 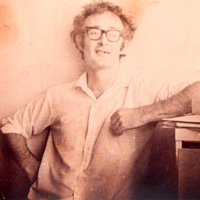 Richard Turner, a passionate lecturer pioneering the teaching of radical political philosophy and an advisor to the National Union of South African Students (NUSAS). Turner encouraged political activism by whites in the aftermath of the 1969 departure of blacks from NUSAS. With the help of Harriet Bolton and others, he assisted white students to get involved in the organization of black workers, spurring the formation of the NUSAS Wages Commissions. A moving force behind the Institute for Industrial Education and the South African Labour Bulletin* during and after the Durban strikes of 1973, he helped to recruit and train many future labor organizers.

Turner’s friendship with Steve Biko and others in the Durban-based black consciousness movement enabled him also to act as an effective interpreter of black thinking to politically conscious whites. Though he converted to Islam in 1970 to marry his second wife, Foszia Fisher, Turner maintained a continuous dialogue with students in the University Christian Movement and other church-based activists. 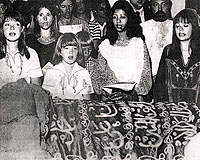 As a contributor to the publications of the Study Project on Christianity in  Apartheid Society (Spro-cas), he compelled his colleagues to consider more  radical recommendations than those prescribed by traditional liberalism. In an influential response to the final report of the Spro-cas Political Commission in 1973, he wrote the utopian The Eye of the Needle, in which he envisioned a decentralized socialist society. The Durban Moment of intellectual excitement centering around Turner ended when he was banned along with seven national NUSAS leaders in March 1973. He continued informally to advise unions and remained in contact with student leaders, but it became illegal for him to teach, publish or be quoted.

A brief respite from his  non-person status occurred when he testified as a defense witness during the  1975-76 trial of the  SASO Nine. In 1976 the government denied him permission to  take up a prestigious Humboldt fellowship in Germany.

Shortly after midnight on  January 8, 1978, two months before his ban was due to expire, Turner was shot  through a window of his suburban Durban home and died in the arms of his  13-year old daughter, Jann.

There are two articles written by Richard Turner's daughter, Jann Turner for the 30th anniversary of the death of her late father ... read more