1919
Mohamed Kathrada and his wife Hawa, immigrants from India, arrive in Schweizer Reneke, a small town in the Western Transvaal (now Gauteng), where they open a small shop.
1929
21 August, Ahmed Mohamed "Kathy" Kathrada is born to Mohamed Kathrada and his wife Hawa, in Schweizer Reneke, .  He is the fourth of six children. Ironically, the midwife who delivered Kathrada, was an Afrikaner midwife known as Ouma Oosthuizen.
1938
January, At the age of eight, the young Kathrada goes to Johannesburg to stay with his paternal aunt, Fatima, at Nursery Road, Fordsburg. He attends the Newtown Indian Primary School.
1940s
Kathrada meets Yusuf Dadoo, I.C. Meer, Yusuf and Molvi Cachalia and J.N. Singh, Kathrada is involved in the anti-war (World War II) campaign of the Non-European United Front.
Kathrada helps to distribute Dadoo’s court statement when he is arrested. Dadoo is to become Kathrada’s mentor, comrade and friend.
Kathrada and a few school friends ran fruit and vegetable stalls set up by the Nationalist Group of the TIC against discriminatory licensing laws in Johannesburg.  Here they sold their produce without a licence for a few months until the campaign petered out.
1941
At the age of 12, Kathrada joins the Young Communist League of South Africa.  It is at the Young Communist League’s meetings that he meets Ruth First, Duma Nokwe, Harold Wolpe, Paul Joseph and many other leading Communists.  Kathrada, by now a student in Standard 7 (Grade 9), together with other young boys, assist in collecting money and goods for the Bengal Famine Relief Fund.  It is here that he meets Ismail Meer, a student at the University of the Witwatersrand (Wits). Kathrada is elected to the Young Communist League’s Johannesburg District Committee at the age of 14. He is appointed editor of the school publication, The Historian.  The Principal of the school halted the distribution of the very first issue due to its ‘political content’
1944
His Standard 8 (Grade 10) Science and Mathematics teacher, a Mr du Preez, an Afrikaner, gives him the nickname ‘Kathy’
Mid 1940s
Kathrada is admitted into the Communist Party of South Africa on probation.  He assists with the sale of the Guardian newspaper and distribution of Party literature and attends Party meetings and engages in other Party activities.

In 2002, the Palace of Justice’s entire interior was renovated, except for the holdingcells below ground level. Source: Nelson Mandela Foundation

1945
When Kathrada is in Standard Nine (Grade 11), he moves into his own flat with two school friends, Abe Gani and Ahmed ‘Dos’ Kola.
1945 -1946
Kathrada is a founding member of the Transvaal Indian Volunteer Corps and that of its successor, the Transvaal Indian Youth Congress. He is later elected as its chair.
1946
At the age of 17, he leaves school in his matriculation year to work full-time for the Transvaal Passive Resistance Council under the mentorship of I.C. Meer. The South African Indian Congress (SAIC) launches the Passive Resistance Movement against the Asiatic Land Tenure and Indian Representation Act, which is commonly referred to as the "Ghetto Act". This Act seeks to give Indians limited political representation and defines the areas where Indians can live, trade and own land. Kathrada is one of the 2 000 volunteers imprisoned in that campaign and serves a month in a Durban jail along with other resisters such as Monty Naicker, Dr. Yusuf Dadoo, Dr Goonam, George Singh, Mrs Cissie Gool, M D Naidoo and others. This is his first jail sentence for civil disobedience.
1947
January, Kathrada is released from prison in Durban.
1947
Kathrada moves into I.C. Meer's flat, No. 13 Kholvad House, Market Street, Johannesburg He is elected to attend the first World Youth Festival, in Prague. A hit-and-run accident prevents Kathrada from travelling overseas.
1950
The Communist Party of South Africa (CPSA) is dissolved following the passing of the Suppression of Communism Act,
In preparation for Freedom Day on 1 May, a small group made up of Faried Adams, Mosey Moolla, Herbie Pillay, Solly Esakjee, Babla Saloojee and Kathrada form the Picasso Club.  Picasso Club members specialized in painting slogans on walls, putting up posters and distributing leaflets.
In Commissioner Street, Johannesburg, Kathrada has his first and only real argument with Nelson Mandela. The argument revolved around preparations for the strike on Freedom Day with Mandela as an ANC Youth League member and Kathrada as a Communist Party member.
Soon after, at a meeting of the ANC and the Executives of the SAIC and the South African Communist Party (SACP) to discuss the killing of 19 people shot by the police following a general strike on Freedom, the issue is amicably resolved. 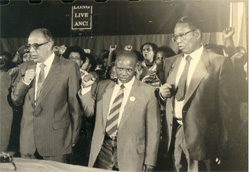