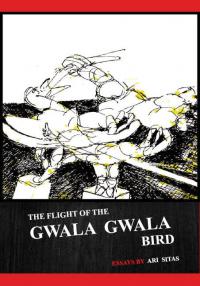 The bird and the forest fly together. The workers, who have little to control, they find it in the union, they sit up and listen, and then the poet and the man, the one who is there the whole time, stands, fighting his way, not giving up, mostly, from the struggle.

The collections of eleven essays were written pre-1990 and are as relevant today as they were in 1980’s. Ari Sitas was directly in the middle, and as cultural activist and sociologist, he took to witnessing and translating the strife of the workers in the Natal’s industries, and the cultural locals that became such a powerful platform for shaping a working class creativity and activism.

The book takes the reader of what it means to be a union member in Natal, the strength in the power of the labourers under a capitalist regime and how the worker cultural activist emerged and shaped resistance on the factory floor and in the communities.

The essays also show how poetry and cultural traditions, mainly Zulu, get transformed in the needs of the worker, the movement and the manifestation of hope, for the workers and as he argues for the youth, that there is more than the life of apartheid, there is brotherhood, sisterhood and there is creativity.