On 17 March 1992, President Frederick Willem de Klerk announced the results of a referendum in which only white people were allowed to participate. The aim of the referendum was to measure White support for the process to negotiate the dismantling of apartheid, which had already been in progress since 1989. The referendum was a gamble for both De Klerk and the National Party (NP) and an opportunity to silence the white right-wing. The latter group, constituted as the Conservative Party (CP) in March 1982 after its members broke away from the NP, was vehemently opposed to negotiations between the NP and the African National Congress (ANC) to end apartheid.

During the second round of negotiations, CODESA II, which commenced in December 1991, the NP insisted that any future political dispensation had to take the form of a power-sharing arrangement. One of the reasons the NP pushed this position was that the CP was seemingly gaining popularity by opposing any transition through a negotiated settlement. The CP capitalised on fears among conservative Whites that a black-led government would be disastrous for them. Recent CP victories in three by-elections had sent jitters through the ranks of the NP.

In 1991 the CP won two seats in by-elections, giving the impression that the party stood a chance of winning a general election. In February 1992 a third by-election was held in Potchefstroom to fill a seat left vacant by the death of Louis le Grange, who was also the speaker of the white House of Assembly. A nervous De Klerk went to Potchefstroom and actively campaigned for the NP. Despite his efforts, the seat was won by Andries Beyers, the secretary of the CP, who garnered 9,746 votes in contrast to the 7,606 votes for his NP opponent, Theuns Kriel. Thus during the period between CODESA I and CODESA II, the NP lost three by-elections to the CP.

While the defeats did not weaken the NP and its control of parliament, it emboldened the CP to further harden its stance against negotiations. As Beyers argued: “The message to Mr De Klerk is to resign and call a general election.” On 21 February 1992, De Klerk reacted to the challenge by announcing that the country would hold a whites-only referendum to ascertain white support for negotiations.  De Klerk also stated that he would resign as president if the majority voted against the process of dismantling apartheid. The outcome of the referendum would have profound implications for the future of South Africa.

CP leader Andries P Treurnicht, also known as “Dr No”, gave an undertaking that his party would participate “as long as the playing field is level”. While the CP welcomed the poll, some ANC leaders were opposed to the referendum as it was for White people only. But Nelson Mandela persuaded the ANC to throw its support behind a “Yes” vote as a “No” vote or even only a narrow NP victory could have plunged the country into chaos – right wing elements would reverse the entire negotiation process. Chris Hani and the secretary of the South African Council of Churches, Rev Frank Chikane, among others, warned of the implications of a “No” vote. To dispel perceptions fuelled by the right wing that whites would lose everything under an ANC- or black-led government, Mandela assured whites that an ANC-led government would not retrench white civil servants, and that those who left would retain their benefits.

Various local and international institutions expressed concern should the referendum return a “No” vote victory. Big businesses in the country highlighted the dangers of a “No” vote and vigorously campaigned for a “Yes” vote. Companies such as Anglo-American, Barlow Rand, BP, Caltex, First National Bank, Murray & Roberts, Shell, and Standard Bank weighed in and canvassed for a “Yes” vote among their employees. Several business leaders launched a Private Sector Referendum Fund to finance the campaign for a “Yes” vote. An estimated R1-million was raised in support of De Klerk and the “Yes” vote.  Adverts in newspapers stated:

“This is what we have achieved since I990: we have already been accepted back into the international fold; sanctions have been lifted, trade is starting to prosper; investment capital is pouring in, creating new jobs, new opportunities. This is what a 'No' vote will destroy overnight.” (Sunday Times, 8 March 1992)

Chester Crocker, the former US Assistant Secretary of State for African Affairs, indicated that the US would not defend a right-wing Pretoria regime and would demand punitive action. The Federation of Economic Organisations in Japan threatened to snub South Africa should the CP win. The Australian government threatened to reinstate sanctions and ban the South African national rugby team (Springboks) from playing in Australia.

On 12 March the European Parliament in Strasbourg declared that a positive outcome (a victorious “Yes” vote) would accelerate the normalisation of South Africa’s relations with the West and hasten the removal of sanctions on arms sales. That same day leaders of the Frontline States deliberated on the implication of a “No” vote in Zambia’s capital Lusaka at a one-day summit. In attendance were representatives of the ANC and the Pan Africanist Congress (PAC). After the meeting the states issued a joint communiqué on the impact a “No” vote would have for Southern Africa.

In South Africa other political formations also campaigned for the “Yes” vote. Zach de Beer, the leader of the Democratic Party (DP), said at a public meeting in Port Elizabeth that his party’s view was that a “No” vote would bring the right wing to power, leaving them free to “decide which part of South Africa is to be reserved exclusively for whites”. This would result in the reinstatement of all forms of international sanctions, including economic sanctions. In addition the party printed posters encouraging voters to shun the “No” vote.

The CP formed a pact with other right-wing parties opposed to the President's reform process, such as the Afrikaner Weerstands Beweging (AWB), led by Eugene Terre’Blanche. Certain black people also supported the position of the CP – two days before the referendum the head of the Reformed Independent Churches Association, Bishop Isaac Mokoena, declared: “Giving in to the ANC means capitulating to communism. I am trying to stop the ANC-SACP takeover. For that reason the CP must win.” (City Press, 15 March 1992). 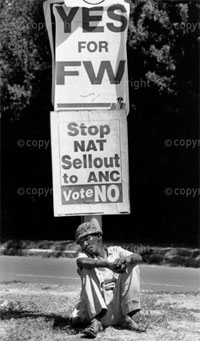 A poster (bottom) for the whites-only referendum reflects right-wing views of the process of negotiations between the NP and the ANC. Photograph by Graeme Williams. Permission: Africa Media Online

The question the voters had to decide on was: “Do you support the continuation of the reform process that the state president started on 2 February 1990 and which is aimed at a new constitution through negotiation?” On the voting day, 86 percent of the registered voters turned out and 68.7 percent (1,924,186) voted “Yes” in all of the 15 regions expect one. The “No” vote stood at 875,619. Polling patterns in major towns showed approval for the “Yes” vote. Pretoria voted 57 percent “Yes”, while Cape Town and Bloemfontein polled 85 and 58.5 percent respectively. In Pietersburg (now Polokwane) white people voted “No” with a majority of 56.8 percent.

Thus, De Klerk won his gamble and defeated the CP and its white right-wing sympathisers. He also hoped to use his victory to strengthen his position in the negotiations. De Klerk declared: “Today we have closed the book on apartheid. It doesn’t often happen that in one generation a nation gets an opportunity to rise above itself. The white electorate has risen above itself in this referendum”¦” (Meredith, 1997, p.456). As Mandela noted after the outcome of the results: “In principle, the referendum signalled the end of white privilege”¦ the ‘Yes’ vote means that whites are now prepared to address these problems. There is no alternative to negotiations.”

The outcome was more than just an approval for the NP to continue with the negotiation process; it reflected approval for a “peaceful” transition from apartheid to democratic rule.