Since slaves were used as domestic servants in the settler colony from the middle to late 18th century, domestic employment originated during the colonial era[i]. Early Dutch immigrants employed and enslaved members of the indigenous population, mostly the Khoikhoi or San and frequently male for domestic labour, according to records dating back to 1777[ii]. Slaves, San, Khoikoi, Coloureds, Indians, Europeans, and African women and men all participated in domestic duties[iii]. In the beginning of 1820, a wave of immigrants from England, many of whom were domestics, disrupted the system of forced domestic labor[iv]. The rise in white English colonial settlement during  the 19th century caused white women immigrants to dominate domestic labour[v]. For the subsequent 50 years, a sizable portion of European people worked in the domestic sector[vi]. Poor housing and the fact that they were mixed with black employees in homes with several maids deterred white immigrants from working as domestic workers, which led to a change in the employment of white English women[vii].

As substitute positions became available, Africans took over domestic employment from Europeans and by 1890, domestic service had changed into a predominately female black institution[viii]. The shifts in domestic work that happened, where it suddenly became a job  primarily held by African women, have a racial and sexual dominance[ix]. In the Cape,  white immigrant women had chosen to quit domestic duties, black women—both African and Coloured—took their place, while black African males did so in the Witwatersrand and Natal's coastal colony[x].

Due to employer complaints about the shortage of available inexpensive labor, the government ensured that native Blacks dominated the domestic work force[xi]. Men from Zululand and Natal became houseboys around the turn of the 20th century as a result of limited urbanization in Johannesburg and the cow plague that ravaged most cattle-keeping communities in Southern Africa[xii]. In 1905, the South African Native Affairs Commission urged that African women domestics be promoted because they believed that the employment of Native women in domestic work would release a significant number of African men and boys so they can go and work in the mines.

After the Anglo-Boer war in the first ten years of the 21st century, there was a need for male labor production in mining[xiii]. The oppression of domestic workers was a holdover from the colonial era  even when domestic work was still done by houseboys, these houseboys were also oppressed. They resorted to joining a gang called Amalaita in which they attempted to reclaim their masculinity and manhood by acting aggressively at night as a result of the oppression and exploitation they experienced at work during the day. If they weren't paid, they would also break into the homes of the employers  where they were working for due to low wage and maltreatment[xiv]. White individuals also left the industry due to its exploitation and low compensation, forcing African people to enter domestic labour .

Young African girls' education in mission schools and government-run institutions supported  the notion that domestic labour was what they were meant to accomplish[xvi]. Even churches were involved in the management of these hostels because they domesticated African girls for their households as well as for paid domestic labor. Hostels were open in the cities for African women to wait for employment and these hostels encouraged African women to want to be employed as domestic workers[xvii]. These churches that administered the hostels were particularly connected to the state since they assisted in the supply of domestic labor[xviii].

Deprivation of social life, reasonable working hours, negotiated wages, disruption of family life and favourable working conditions formed part of the precariousness in which domestic workers were subjected to. The inability to rent a home in a location of their choice, the inability to sell their labor in a location of their choice were part of the exploitation they were subjected to. They were never treated respectfully, and their dignity was never recognised. Their work lacked value and were not granted legal protection. They were deprived of effective bargaining power and paid leave. Until the apartheid era, this colonial system of domestic work prevailed[xix]. 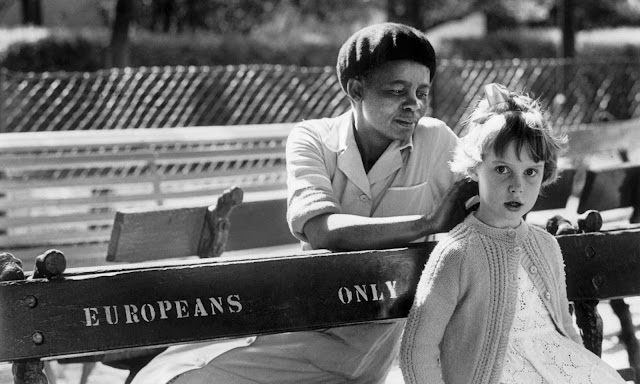 A girl and her maid in apartheid South Africa. Image Source: A Girl and Her Maid on a 'Europeans Only' Bench – The Story Behind Peter Magubane's Iconic Photograph ~ Vintage Everyday

There was no change in the way in which domestic workers were treated in the apartheid period compared to the colonial period. Domestic workers were not given the chance to bargain over pay, working conditions, or their social life[xx]. Only a small percentage of  domestic workers during apartheid were given yearly leave or holidays[xxi]. Domestic employees were not treated with respect, they were subjected to poor working conditions, they lacked  bargaining power, and were not allowed to join a union or other workers' group[xxii]. Domestic workers were paid less than the amount of labor they really performed, and the employer took advantage of their excess[xxiii]. Additionally, domestic employees were not eligible for benefits under the Workmen's Compensation Act and the Unemployment Insurance Fund[xxiv].

[i] Ally, S. 2009. From Servants to Workers: South African Domestic Workers and the Democratic State.

[xiv] Dilata, X.P., 2008. Between'sisters': a study of the employment relationship between African domestic workers and African employers in the townships of Soweto.

A history of Apartheid in South Africa