Another example of this division was highlighted in the formation of the Disorderly Bills Action Committee (DBAC). The DBAC was formed in Aug 1982 to oppose Minister Kroonhoof’ proposed bills that were designed to regulate the movement, residence of African people outside homelands and to increase the powers of African municipal councils. Over 60 civic organizations such as sports and cultural organisations, trade unions in Cape Town, Black Sash and NUSAS converged to deliberate the implications of bills. Subsequent to the meeting, the DBAC was formed. Some organisations and their representatives questioned the presence of white liberal organisations such as Black Sash and NUSAS. These divisions resulted in the breaking away of 40 organisations from the DBAC in 1983 who renamed their new organisation the Cape Action League. Civic organisation divisions at time undermined the joint action on common grassroots concerns, e.g. rent increases and the maintenance of food subsidises.

The 1990s were marked by intense rivalries and conflicts within the civic movement in the Western Cape. What precipitated the conflicts were the fragmentation of civic organisation activities in the Cape Town area largely because of social divisions which were driven by the pass laws and the enforcement of migrant labour practices. The locations where civic organisations emerged provide a pattern that became a recipe for conflict. For instance, WCCA emerged in urban African townships, the HDA in hostels and the WECUSA in squatter areas. WECUSA was formed and launched in 1989 as an alliance of ANC aligned squatter leaders, particularly areas that were rocked by the 1986 violence perpetrated by witdoeks.

WCCA and WECUSA relations deteriorated as some informal settlement leaders such as Prince Gobingca and Conrad Sandile joined WECUSA. The state saw an opportunity and privileged WECUSA through the Independent Development Trust (IDT) and CPA. In 1991 open conflict for the political control of informal settlements broke out between SANCO, WCCA and WECUSA in Khayelitsha, Lwandle township and Waterkloof in Somerset West. Lwandle which was a SANCO strong support base for SANCO became uneasy when WECUSA established a branch in a neighbouring informal settlement of Waterkloof. In Philippi residents revolted against WECUSA member Christopher Toise forcing him to flee the area. Over the course of civic organisation conflict several people were killed.

An attempt was made in 1984 to form a national organisation that would bring together different civic organisations but it failed as many civic leaders were banned and jailed under the state of emergency regulations.

After the unbanning of the political organisations, a national body of civic organisations was established in 1992 as the South African National Civic Organisation (SANCO).  But, efforts to merge these fragmented structures and build a single umbrella organisation were hampered by leaders made frantic efforts to retain their constituencies. The conflict between WECUSA, SANCO and WCCA ultimately led to the establishment of WECCO (Western Cape Civic Organisation) at Devonvale Country club in Stellenbosch in 1993. The new organisation brought together a range of anti-ANC civic structures as a counter to SANCO. There were suspicions that the launch of WECCO which was addressed by Mr Themba Khoza of the Inkatha Freedom Party (IFP) was the National Party, channelled through a building company called EU Civils, and was addressed.

The Truth and Reconciliation Commission (TRC) concluded that conflict among civic organisations particularly WECUSA and SANCO were as a result of power struggles to control constituencies. Furthermore, evidence at hand suggested that WECUSA was manipulated by the state security forces as some of its leaders such as Prince Gobinga were linked to the security branch. State involvement was aimed at flushing out liberation movement cadres and destroying their hideouts.

The 1980s also saw the increased activity of the ANC in the Western Cape. One of the operations undertaken by the organization was code named Operation Mac, named after Mac Maharaj a leading figure in the underground operations of the ANC. The attack on Keoberg Nuclear station was carried out Rodney Wilkinson with assistance from his girlfriend Heather Gray. Wilkinson was former South African national fencing champion who left university and joined a community of people residing near Koeberg nuclear power station in the late 1970s. After finding employment at the plant which was still under construction at the time, Wilkinson stole building plans of the plant and smuggled them to Zimbabwe where he met representatives of the ANC and idea of bombing Koeberg was muted. The ANC received Wilkinson with suspicion and vetted him before asking him to carry out the attack. Wilkinson returned to South Africa and was employed once more at the plant with the task of mapping pipes and valves at the plant for use in cases of emergency. 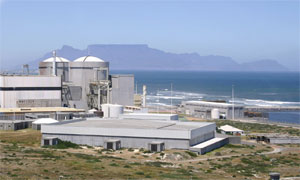 An ANC leader in Swaziland was assigned to work with Wilkinson to map out the strategy for the attack. Three possible targets were identified, first were the two reactor heads, the second was a section of the containment building and the third was concentration of electric cables under the main control room. Wilkinson and his girlfriend Gray dug up four limpet mines from a roadside arms cache in the Karoo. They placed them in wine-box decanters in their car, a Renault 5 before driving back to their home in Claremont, Cape Town.  From here Wilkinson smuggled the mines, one by one, in a hidden compartment of the Renault, through the perimeter security fence at the nuclear installation, depositing them in a desk drawer in his prefabricated office. Wilkinson then carried the explosive devices hidden under his work overalls through into the main building.

The date for the attack was 16 December 1982, a date that was rallying point for Afrikaner nationalists and conversely an important one for MK, as it marked commencement of the armed struggle. But Wilkinson did not manage to install the explosions to the targeted date of December 16, but finished planting the bombs on 17 December. The fuses were set for a 24 hour delay to allow them explode on 18 December when the plant would be deserted. Wilkinson flew to Johannesburg before skipping the country into Swaziland. The explosion detonated causing damage to an estimated cost of R 500 million and delaying the commissioning of the plant by 18 months. From Swaziland he went to Mozambique where he met Oliver Tambo and his girlfriend. After that they proceeded to Britain where they lived in exile.