The Congress of South African Students (COSAS) was established in June 1979 as a national organization to represent the interests of Black school students in the wake of the Soweto uprisings. During its formation the South African Student Movement (SASM) and other organizations of the Black Consciousness (BC) movement were banned by the apartheid government. COSAS organized students at secondary and night schools, as well as technical, teacher training and correspondence colleges. Soon after their formation, the organisation set up branches in the Eastern Cape, Western Cape, Transvaal, Orange Free State and Natal. Branches in the various provinces were set up with the aid of executive members specifically deployed into the various regions for that purpose. Other student organizations also assisted COSAS with establishing its branches in their areas.

Initially a BC orientated organization, a year after its formation COSAS became the first organization to declare its support of the Freedom Charter. Its first president, Ephrahim Mogale was actually a clandestine member of the African national Congress (ANC) and was later to be convicted of furthering the aims of the ANC. At the time of its formation the ANC was banned along other liberation movements under the Unlawful Organisations Act. A guiding principle for COSAS was the view that the ANC was the authentic liberation movement of South Africa. In its first two years COSAS took up two commemorative campaigns that authorities saw as ANC-supporting; the 1979 hanging of uMkhonto weSizwe (MK) guerrilla Solomon Mahlangu and the centenary of the Zulu victory over British troops at Isandhlwana.

The organization’s principle aims were the conscientising of students and the wider community to the repressive nature of education in South Africa, and to participate in the drawing up of an educational charter for a future, non-racial democratic education system. Its view was that a democratic education system could only be achieved in a democratic society based on the will of all the people. It recognized that Bantu Education was aimed at controlling and indoctrinating youth and that this could only be changed by transforming the country’s entire political system. Although it was primarily education focused, COSAS identified the relationship between educational and social transformation in its statement of beliefs: 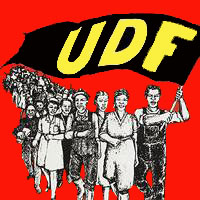 In its early years, COSAS, focused on educational issues but with its alliance to the UDF, by the end of 1984, its students were making demands around educational as well as political issues. Throughout the 1980s, under the banner of COSAS students have staged a variety of resistance tactics like boycotts, strikes, negotiated and laid down demands. In Cradock, Eastern Cape students from seven schools boycotted the transfer of Mathew Goniwe, a teacher and anti-apartheid activist. Goniwe was being transferred by the Department of Education and training (DET) to be a principal at a school in Graaf-Reinet.

According to Bahman 2003, the decision to transfer Goniwe was part of a plan to remove him from his community as he was seen as a strong opponent and champion of the residents. Two years (1985) later Goniwe was assassinated  together with Fort Calata, Sparrow Mkonto and Sicelo Mhlauli on what became known as  ‘Cradock Four’. On 14 February 1984, a 15 year old student, Emma Sathekge was killed and scores were injured when police clashed with pupils boycotting classes as they were demanding, among other things the removal of the age-limit law and the right to form Student Representative Council’s (SRC). Emma Sathekge was killed in the black township of Atteridgeville, Pretoria. Her funeral was attended by more than 10 000 mourners. At the funeral, the COSAS speaker Tlhabane Mogashoa said; â€œWe will prove in action that Bantu education is evil. We will revolt against it until it has been utterly scrapped, dumped on the junk-bin of history and buried once and for all.â€

At Minerva High School in Alexandra Township boycotting students were given a right to form SRC.  The students boycott on age-limit law spread countrywide. The recommendations by the age-limit law were rejected by students as from the inception in 1981. 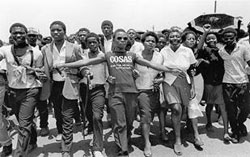 By the end of 1984, it had succeeded in drawing community support for the students struggle when it successfully called on the community to participate in the Transvaal regional stay-away. Demands made by the organization included: 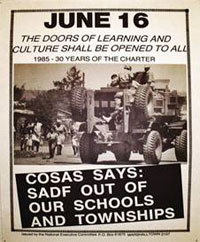 By 1985, school boycotts had rendered the schools unworkable and ungovernable and mirrored the collapse of the Black Local Authorities in the townships. Their slogan â€œLiberation now, Education later!â€ saw chaos in schools across the country and resulted in the National Education Crisis Committee being formed in 1986. Eventually COSAS was banned in mid 1985 as the state of emergency was declared by South African government. At the inaugural conference of the UDF, COSAS claimed a membership of 44 branches nationally and by the end of 1984 it had developed a well organized structure with branches in nearly 50 centres around the country, with the majority of its membership coming from the Eastern Cape and the Southern Transvaal. By the time of its banning in 1985, it was estimated that the organization enjoyed the support of almost 3 million students, or more than half the country’s Black students.

However, COSAS continued to play an active role although it was banned. The organisation helped to establish South African Youth Congress (SAYCO) which was secretly established in Cape Town in 1987. During the resistance campaign, launched by extra-parliamentary groups under the auspices of the Mass Democratic Movement (MDM) in August 1989, COSAS unbanned itself. On 2 February 1990, President F.W. de Klerk announced the release of Nelson Mandela and unban of liberation movements. In May 1990 the organisation was reinstated at Orlando Stadium, Soweto. On the same occasion Rapu Molekane, general secretary of Sayco, said that COSAS should support the process of negotiation in South Africa. According to Molekane, "people's education" can be brought about only by the transfer of political power to the people. He supported the ANC's re-quest for discipline during the struggle. At the same time the publicity secretary of COSAS, Mike Dube, gave an exposition of the organisation's re-building process. In October 1990 two of COSAS's management members joined the Provisional National Youth Committee, established to reactivate the ANC Youth League (ANCYL).

During the national congress of COSAS held in December 1995, the South African President Nelson Mandela said; â€œIt is refreshing for me to brush shoulders with the young lions of a democratic South Africa. Your organisation earned its proud reputation in the crucible of struggle. Yours is not an association of arm-chair critics. From the day of its formation, the Congress of South African Students demonstrated that it practises what it preaches.

Above all, we are proud that, today, COSAS is making its mark as a leader in the reconstruction and development of education, as a builder par excellence.

Through positive and creative campaigns, you are showing that when you mobilised for militant action against apartheid education, you did not see this as an end in itself. When you refused to succumb to the apartheid jackboot, it is because you knew you had a role not only in eradicating racist education, but also in the introduction of the new system. As we join efforts to build a new educational system in a new society, COSAS has not been found wanting...â€

The COSAS continued to play an important role in education and other social issues in South Africa. In 2011 the Chairperson of COSAS, Mr Ntsako Mogobe called on learners to hit back at teachers who use physical violence against them.

In January 2012 while the country was celebrating matric results, the COSAS took to the streets in Durban to protest against the results being published in newspapers. Provincial deputy chairperson of the organisation, Goodman Machi, said they had marched from the City Hall to the regional Department of Education office to hand over a memorandum.