When Black workers in Durban embarked on a wave of strikes in January 1973, the government and employers were shocked, and they responded mainly by giving in to the workers’ demands. Thus began a resurgence of union activity that would culminate in the formation of massive trade union federations that helped dismantle apartheid by the late 1980s.

From the beginning of the 20th century Black workers in South Africa made many attempts to organise themselves into unions with varying levels of success. The Industrial and Commercial Union of Clements Kadalie in the 1920s was the first success on a mass scale, but it dissolved as the organisation faced mounting pressures, some of them the result of its own success. Subsequent attempts were made and these suffered similar fates, the most notable being the rise and eventual demise of the South African Congress of Trades Unions (Sactu)

Emerging in the early apartheid period, Sactu was so interlinked with the Congress-aligned political organisations that when the state cracked down on anti-apartheid activity, many unionists who were also ANC activists were banned, and by 1965 Sactu petered out.

From the early 1960s onwards, the state brutally suppressed all political and union activity, and the lull in anti-apartheid resistance was broken only in the late 1960s by Steve Biko and the Black Consciousness Movement.

The BCM’s leaders realised the necessity of reigniting union activity, and put into motion plans to launch unions when they appointed Drake Koka to drive the project. But once again a state crackdown disrupted their plans.

Meanwhile, with the rise of Black Consciousness and their strictures against joint black/white political activity, many white intellectuals and aspirant activists gravitated to union issues. In 1971 lecturer Dave Hemson from the University of Natal, together with National Union of South African Students (Nusas) students, established the General Factory Workers Benefit Fund (GFWBF), and began organising workers in Durban. The Wages Commission, also a Natal University project, began to study the conditions for unionisation, and played a role in the re-emergence of union activity.

But the wave of strikes that began in January 1973 was started by workers themselves, with no obvious help from unions or any other body. The wave of strikes instead point to structural conditions that allowed for spontaneous strikes to occur in many factories and workplaces in the city.

In 1970, official estimates put the African population at about 400,000, but even this figure was seen as too low by the Bantu Administration officials, who estimated that the figure of 1-million would probably be more accurate, with about 200,000 in employment. Durban at that time was the second largest industrial complex in South Africa, its share of manufacturing output standing at 12%.

On the morning of 9 January 1973, all 2000 workers at Coronation Brick and Tile went on strike, demanding that their wages be increased form R8,97 to R20,00 a week. Workers living in the brickworks factory’s hostel marched to a nearby stadium after they were woken at 3am and asked by fellow workers to join the strike.

Some rumblings about a strike had been circulating a few days before the actual event, and on 8 January management issued leaflets that said talk of an upcoming strike was the work of communist agitators. But before this, the workers had been addressed by King Goodwill Zwelithini in the latter part of 1972, and came away with the idea that their wages would be raised the following year. Workers might also have become aware of work done by the Wages Commission for the Wage Board indicating that their wages were very low.

Efforts by both management and the Bantu Labour officer for Durban to convince he workers to elect a representative body that would negotiate on their behalf were rejected by the workers, who feared leaders would be victimized. 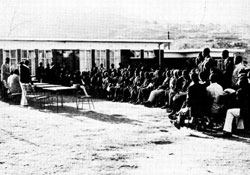 With a deadlock in place on the first day, King Goodwill Zwelithini intervened, and promised to represent the workers, urging them to return to work. Nevertheless, the situation remained confused, and the workers elected a committee on 14 January, headed by Nathaniel Zulu. They met with management and rejected the first offer of an increase of R1,50, but agreed to a second offer of R2,07, which brought the minimum wage to R11,50 a week. The offer was made to the workers on a plant by plant basis, and they were unable to confer with each other, and the offer was grudgingly accepted.

Meanwhile, on 10 January, workers at the transport firm AJ Keeler stopped work for 45 minutes, but failed to mount a full-blown strike. On 11 January workers at a tea packing company, TW Becket & Co, went on strike, demanding an increase of R3 a week. Police were called in and the workers were told to return or face dismissal.  Of the 150 strikers, about 100 decided to continue the strike. By 25 January the company agreed to raise wages by R3,00 a week and agreed to reinstate most of the dismissed workers, although ‘troublemakers’ were left out in the cold.

The workers’ actions at these three companies seemed to kick off a series of wage disputes at other companies, and ship painters at two companies also went on strike.

Reactions to the strikes were surprising: the Afrikaans newspaper Rapport and the SABC called for better working conditions for black workers, and Chief Buthelezi denounced companies that fired workers for going on strike. Even the police weighed in, stating that the strikes seemed to have been spontaneous and that no agitation had been detected.

On Monday, 22 January, truck drivers at a transport company went on strike. Management took a hard line and called in the police, and when workers refused the first wage offer 250 workers were dismissed. By 25 January workers returned to work, but 100 had been dismissed.

By the end of January, the newspapers could no longer give precise details of the various strikes, and the Natal Mercury printed a list of 29 firms affected by strikes. Employer representatives flew to Cape Town to discuss the strikes in parliament, which was reopening.

The Minister of Labour blamed agitators, but came under fire from the English Press, which blamed employers for paying low wages, and focused particularly on Philip Frame of the Frame Group. Even the Natal National Party’s mouthpiece, Die Natalier, blamed ‘shocking wages’ and industrialists for the labour unrest.

On Monday, 5 February, 3000 Durban Corporation workers employed by the cleaning, electricity, road and drain departments stopped work. By the next day 16,000 workers from the Corporation’s other departments joined the strike, and garbage soon began piling up, affecting businesses and the city’s essential services. By Wednesday 30,000 Corporation workers were on strike, and as other workers in Pietermaritzburg and Port Shepstone downed tools, a general strike loomed.

But by 8 February the municipal workers returned, and by the next day, the wave of strikes lost their momentum, although sporadic strike activity continued unabated over the next year.

Insufficient Explanations: the Mystery of 1973

The wave of strikes proved to be a puzzle for many: government, the media, unions, and social scientists, among others. What was difficult to explain was the fact that after a prolonged period of union-bashing which was more successful than not, a resurgence would take such a sudden and dramatic form.

While government officials such as the minister of labour and others announced that agitators had orchestrated the entire episode, other government agencies such as the police admitted that they had not detected the presence of specific groupings pulling the strings. This confusion within the government would eventually be resolved by dramatic changes to labour legislation.

While various groups were named by various agencies as agitators – including the KwaZulu government, the Black Consciousness Movement, Nusas and the University of Natal’s Wages Commission – none of these were in the position to have organised the strikes, and none were shown to be behind the wave.

The fact that wages in real terms had declined, that the cost of living had climbed while wages remained at the same level, meant that the workers were increasingly unable to make ends meet. These structural conditions predisposed workers to take industrial action, but the absence of union structures means there was no specific agency that sparked the workers to take action.

The spontaneous wave of strikes in Durban led to the renewal of union activity in the country. The state was unable to stem this renewal, and indeed it conceded that Black unions were here to stay when it appointed the Wiehahn Commission, and implemented the commission’s recommendations to allow Black unions to become registered for the first time since 1956.

The years from 1973 to 1985 saw a surge of unionism unprecedented in South African history. The Trade Union Advisory Co-ordinating Committee was formed later in 1973, and got a huge injection of members following the strike wave early in the year.

The launch of the Metal and Allied Workers Union (Mawu) in 1973 was followed in 1974 by that of the Chemical Workers Industrial Union (CWIU) and the Transport and General Workers Union (TGWU).