Revolution literally means a turnaround or a complete somersault. It is used to describe periods or events that bring about dramatic change in politics, economics or society. A political revolution happens when a group of people rebel against the existing government and attempt to overthrow it. It is usually associated with violence, like the French Revolution, and sometimes leads to civil war. There are however political revolutions that are bloodless, in other words, where the existing government is replaced without any violence. An economic revolution takes place when the economy of a country is changed dramatically, like with the invention of new production methods that rapidly speeds up manufacturing and expands production.

Some revolutions bring about sudden change, like the English Revolution that led to the constitutional monarchy that England still has today. Others take much longer to affect the existing order, like the European Industrial Revolution that took time to spread from England to the rest of Europe. Certain revolutions and the changes they bring also last longer than others. For example, the French Revolution lasted 10 years, after which France resumed some of the despotism the people fought against in the first place. It took more revolutions in France to set the country on the road to democracy. The effects of other revolutions have been irreversible. For example, once industrialisation had begun in Britain and Europe, there was to be no turning back to the way things were before the Industrial Revolution.

In general, therefore, a revolution refers to something that begins a process of fundamental change to a political, social or economic system.

The philosophy behind a revolution is usually directed by and educated elite group who wish to write a Constitution for the country and to institute liberal reforms. The process, however, is often taken over by radicals. Radicals demand more sweeping and extreme changes. Violence and anarchy often erupt. Human rights are suspended, and tyranny and terrors are sometimes features of revolution.

Conditions in France in 1798

The way France (and most European countries) was governed in the eighteenth century was very different from democracy. We refer to France before the revolution as the “Old Order” or the “Ancien Regime.” It was a rigid system and only to a certain class of people were privileged. This created grim economic situation that caused a revolutionary situation. Grievances in France was widespread amongst the peasants, the middle class and poorer people as poor harvests led to people not having enough food. Many unemployed people moved to the towns especially Paris in search of work but the pressure was already building up. The king Louis XVI was weak and incompetent and did not see how serious the situation was.

French Society was divided into three estates. Each estate had its own place in society. A person’s position in society mattered a great deal. The first and second estates had privileges which gave them advantages over the members of the estate. It was difficult for a person to move from one estate to another.

The third estate consisted of all the people who were not nobles or members of the clergy or monarchy. These people had no privileges and were all regarded as members of the third estate, regardless of their education or wealth. In reality, this group made up 97% of the French population and it was comprised of middle class people (known as the bourgeoisie), peasant farmers and other workers.

The 22 million peasants (farmers) in France made up 85% of the population. Together with the town workers (8% of the population), they paid the heaviest taxes in the country. There were some peasants who were reasonably successful but the vast majority was desperately poor. They had a hard life, being forced to fight whenever France went to war, sometimes paying three-quarters of their income in tax and having to do forced labour on roads and for the local landowners.

The bourgeoisie made up 4% of the population and were people such as bankers, lawyers, merchants and doctors. Many were highly educated and some of them were quite wealthy, but they were very rarely appointed to top positions and had no chance of gaining power. They also had to pay taxes. 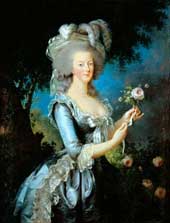 Louis XVI became King of France in 1774. When he was 15 years old it was arranged for him to marry an Australian princess, Marie- Antoinette. They lived in splendor and luxury at the royal palace at Versailles (which had been built at a great cost by Louis XVI). Many nobles also lived at Versailles, hoping to impress the King and get good jobs in the government. They spent their days hunting, gambling, fishing and drinking.

As you have read, the King had absolute power and did not have to answer to the people for what he did. In an absolute monarchy, the character of the king is vitally important. Louis XVI started his reign as a popular king but, within ten years, he and his queen were hated.

It was not only the Kings’ weak character and the extravagance of Marie- Antoinette that made the royal government unpopular. Many people thought that the King had too much power. They particularly dislike his use of lettres de cachet, which were royal warrants ordering imprisonment without trial. During Louis XVI’s reign, 14000 lettres de cachet were issued to people who opposed the government.

The vast majority of French people did not question the way their country was run. They knew no other way of life. During the eighteenth century a small group of educated people did begin to question the situation. They are called the Philosophes and were a group of writers and thinkers who shared a way of thinking which they called Reason. They refused to accept things without questioning and tested them. Many of them began writing long before Louis XVI came to power, but even after their deaths their writings influenced public opinion and educated people began to agree that they wanted reform (change for the better).

Louis XVI took over a country with serious economic problems. Many historians believe that it was a combination of social and political discontent, coupled with popular alternative ideas and economic problems which caused the revolution in France. People had endured the Ancien Regime for centuries. But it was the economic ruin of France which sparked the revolution.

France in 1789
The French Revolution