Essay 1: What were the causes of the French Revolution? 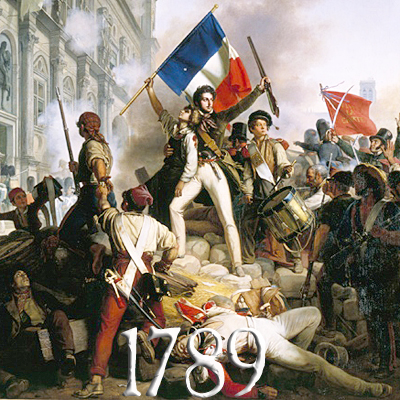 In 1789 the bloody French Revolution began, which would continue till the late 1790’s. The aim of the revolution was to overthrow the monarchy and uproot the system of feudalism, and replace it with ideas of equality, liberty and fraternity.[1] The French revolution occurred for various reasons, including poor economic policies, poor leadership, an exploitative political- and social structures.

The political causes of the French revolution included the autocratic monarchy, bankruptcy and extravagant spending of royals. To understand the causes of the French Revolution, one needs to understand France’s political structure before the revolution began. An autocratic monarchy means that French society was governed by an all-powerful king or queen, believed to have been given divine right to rule by God.[2] These monarchs were hereditary rulers, which meant that the son or daughter of the monarch would be the next ruler.[3] As many believed the monarchs to be a “representative of God”, they did not question the orders of their rulers. But this unlimited power of the monarchs soon led to abuse. Under King Louis XIV reign all monarchs could have anyone arrested and imprisoned by the Letter de Cachet. The monarchs did not care for their subjects as even the innocent could be arrested and imprisoned at any time. This caused anxiety, panic and fear in France.

King Louis XIV reigned from 1643 to 1713. [4] After his death, his great-grandson, King Louis XV became king at the age of five. Both his parents and brother had passed away in 1712, and a regent, Philippe II, was appointed who would govern till he came of age.[5] When King Louis XV finally took the throne, he was a lazy leader who lacked self-confidence and spent more time with his mistresses than with the affairs of state.[6] His national policies never had firm direction. He became known as the “butterfly monarch”.[7] His involvement in the Seven Years War (1756 – 1763) drained France’s treasury.[8] While the country was bankrupt and many citizens were impoverished, taxes were generated to sustain a large army.[9] King Louis XV contributed to France’s bankruptcy due to overspending on his luxurious lifestyle and wars.[10]

The next leader, Louis XVI (1774 – 1793) reign also set the stage for a revolution. King Louis XVI is remembered as a simple man, but his wife Marie Antoinette lived in the lap of luxury. [11] Louis XVI inherited the kingdom and all the debt of France when he became king. He failed to fix the financial situation. The expensive upkeep of his palace and the unnecessary spending of Marie Antoinette angered the French population. Especially as the tax system excluded nobility from paying tax, while the poor paid for the royals’ luxurious lifestyles. By 1786 Charles de Calonne, the general of finances, warned against raising taxes of the poor as it could lead to unrest. [12] As King Louis XVI did not want to tax nobility, De Calonne had to approach European Banks for loans. [13] While King Louis was unable to fix France’s financial situation, his wife continued with her extravagant lifestyle. Marie-Antoinette’s never-minded response to the poor suffering is mostly reflected in the quote: “Let them eat cake”.[14]  Even though no evidence could be found that she truly said it, the famous quote does portray the monarchy’s attitude. While many were starving, the monarchy turned a blind eye. This quote shows how oblivious they were to the suffering of their people.

The defective administration of generations of monarchs set the stage for a French revolution. The poor were no longer willing to pay for the monarchy’s extravagant lifestyles and unwise foreign policies. People were starting to revolt against the idea of “divine rule” and started to question the authority and wisdom of their monarchs.

The third estate consisted of the peasants, which included the sweepers, farmers and cobblers. [21] They were the lowest classes in French society, who were forced to pay taxes to sustain the luxuriously living of the first and second estate.

But besides the unequal taxing given to the third estate, they were also unequally represented in court. The third estate represented 98% of the French population, yet they were outvoted by the first two estates. The third estate fought against this unequal representation and began to mobilize support for abolishing the noble veto. This meant that votes would be counted by the amount of people in favor or against a law, rather than nobles dictating laws. This led to opposition from the first two estates, who wanted to remain in control.

To fight against the current voting system, the Third Estate met on 17 June 1789 alone to change the title of National Assembly. [22] Three days later, they met at an indoor tennis court and undertook the Tennis Court Oath, declaring that would not end their fight until they achieved judicial, fiscal and governmental reform. [23] On 27 June, after 47 liberal nobles joined the Third Estate’s cause, Louis XVI accepted all three orders into a new assembly.

The rise of the third estate against the Estate System and unequal representation due to the class structure also gave rise to the French Revolution. The poor were angered to pay for the luxurious lifestyles of first and second estate. They were also tired of having 2% of the population veto all their rights and having inequal representation in court even though they made up 98% of French society.

Another cause of the French revolution was the economic conditions of France. King Louis XIV “Seven Years War” left France bankrupt. His foreign policies led to expensive foreign wars, which emptied the coffers of the royal treasury. After his death, he was succeeded by Louis XVI. But as previously shown, even though the king was simple, his wife continued with frivolous spending. King Louis XVI also refused to listen to the economic counsel given to him, which led to necessary economic changes being ignored.

Firstly, when Louis XVI took the throne, Turgot was appointed Minister of Finance in 1774. Turgot’s first duty was to rid France of their debt. [24] He came up with a solution to appease the peasants and fix France’s financial situation by minimizing spending of the royal court and imposing taxes on all three estates. [25] However, Turgot’s solution was dismissed after Marie Antoinette intervened. Turgot was fired and Necker was appointed as the new Finance Minister in 1776. Necker remained King Louis XVI Finance Minister for seven years. [26] During his time he published a report of the income and expenses of the government, to appease the French population. [27] But in 1783, he was also fired. Finally, Calonne was appointed Minister of Finance in 1783. Calonne advised the king to improve France’s financial situation by approaching European banks for a loan. [28] The European banks were not keen to lend money to France, but Calonne was able to obtain a loan. Calonne’s solution proved problematic. When France finally did receive a loan, their debt doubled within three years from 300, 000, 000 to 600, 000, 000. [29] Thereafter, Calonne realized that his solution was not feasible and urged the king to impose taxes on all three classes. Finally, Calonne was also dismissed.

King Louis XVI economic decisions finally set the stage for the revolution. The monarchy refused to impose taxes on all three estates, while the royals continued living in a lap of luxury. These decisions created economic instability in France. The peasants were angered, as while they were starving, they had to maintain the standard of living for the rich. Therefore, the economic conditions in France was one of the main reasons for the revolution.

Ultimately, there was three main reasons for the French Revolution. The Estate System, economic policies and autocratic monarchy gave rise to a bloody revolution, which led to the need for equality, liberty and fraternity in France.

Tip:  If there is a term that is unfamiliar to you, please check out our French Revolution Glossary some definitions.

When discussing the legacy of the French Revolution, it is important to understand the causes of the revolution as it gives one a better understanding of the desired outcomes.  For example, one of the main causes was that French citizens who belonged to the Third Estate. grew significantly tired of the absolute power and wealth of the French monarchy and wanted a political system that represented the popular interests.  Consequently, one of the direct consequences of the revolution was that France became a Republic; which indicated a step towards liberty, equality and democracy. [31]  This need for liberty and equality spread to many other countries and especially to countries in central Europe, where popular protest  and movements called for the election of parliaments and to ultimately demolish the feudalistic-approach of European life. [32]

As briefly mentioned, the French Revolution of 1789 demonstrated that an organized group of popular protest and mutual interests could demolish something as established as old monarchies and aristocracies. [33]  This idea significantly led to the revolution of the slaves of Saint-Domingue, a French Colony on one of the Caribbean Islands, who mobilized themselves for the fight for their independence. [34]  In 1804 this movement was able to finally break free from French colonial rule and establish the Republic of Haiti.

When discussing the political movements that were influenced by the French Revolution, it is also important to discuss the Socio-Economic legacies that were influenced by the changes in the political environments.  For example, the fall of the monarchy also meant that the French system of estates (based on Feudalism) also crumbled.  This meant that the French middle class were able to gain better opportunities through acquiring more land (as the Church’s lands were nationalized) and having to pay less taxes (as they did not have to pay Feudal taxes anymore). [35]  Furthermore, the elite classes (such as the nobles and corrupt clergy) lost most of their power and privileges.  Therefore, it is evident that the revolution led to a significant change in the political, social and economic structures of France.

With the middle class and “peasants” (in this context, French farmers) gaining more opportunities and a better standard of living and the decline of Feudalism, as well as the loss of extreme privileges of the clergy and nobleman, a need for the growth in Nationalistic sentiments continued.  Consequently, instead of the protection provided by the Feudalistic-structure, a French army was established. [36] Other examples of the lasting spread of French Nationalism, is the change of France’s flag (the Tricolore), the National anthem (the Marseillaise) and the creation of France’s National Day (Bastille Day). [37]  The legacy of French Nationalism out of the French Revolution still exists today.

When discussing the causes and outcomes of the French Revolution of 1789, it evident that the outcomes of the revolution had a lasting impact on the French political, social and economic way of life.  As seen in the examples of the changing social structures, the change in the tax system and finally the strong rise in French Nationalism.  It is also important to note the legacy created by the ideology of the French Revolution and its effect on many European countries.  For example, as seen in the growth of the Jacobin movements.  One of the most significant phenomena surrounding the French Revolution of 1789 and its legacy, is that the world was able to witness how people were able to organize themselves to fight for National interest and take down century old ways of life.  This ultimately led to the legacy and the birth of the idea of the possibility of differing political ideologies. [38]