Opposition to the participation by the NIC in the Colonisation Commission appointed by the Union Government in 1933, some members of the NIC resigned and formed a body called the Colonial Born and Settlers Indian Association (CBSIA).[2]

In 1935, Sir Sayed Razi Ali was appointed the Agent General in South Africa. Immediately on his arrival in here, he convened and presided over a conference of representatives of both the NIC and the CBSIA. However, on the question of the change of name, there was a deadlock and the conference broke down.[3]

Sir B. Rama Rau, another Agent General from India, on reaching South Africa attempted to reconcile the two organisations. Representatives from both the parties met at his request but no agreement was reached.[4]

During Sir Sarvapalli Radhakrishnan’s visit to South Africa on a cultural mission, he appealed to both organisations, the NIC and the CBSIA to unite.[5]

Prior to this, the South African Indian Congress (SAIC) representatives had gone to Cape  Town to present a statement and interview the then Minister of the Interior, R. Stuttaford, on his proposals to segregate Indians. After a final appeal to the Prime Minister the representatives came away with a feeling that a crisis was impending and that the Indian Community had no alternative but to face it as it had done in the crises of the Class Areas Bill in 1924 and the Areas Reservation and Immigration Restriction Bill in 1926.[6]

This grave threat by the Minister of the Interior to bring in a Union-wide Segregation Bill and the presence of and the appeal by Sir Radhakrishnan in the country brought home to Indians the folly of working in different camps when a common danger threatened them alike.[7]

The final appeal for unity made by Sir Radhakrishnan led to informal discussions, in the first instance between V. S. C. Pather, Sorabjee Rustomjee and A. I Kajee and thereafter between V. S. C. Pather, S. R. Naidoo and S. Rustomjee on the one hand, and A. Christopher, P. R. Pather, S. L. Singh, and P. B. Singh on the other leading to unity proposals being drafted. S. R. Naidoo was entrusted with the task of submitting these proposals to the NIC and P. R. Pather to the CBSIA. [8]

Below, in full, are the terms of the joint agreement.[9] 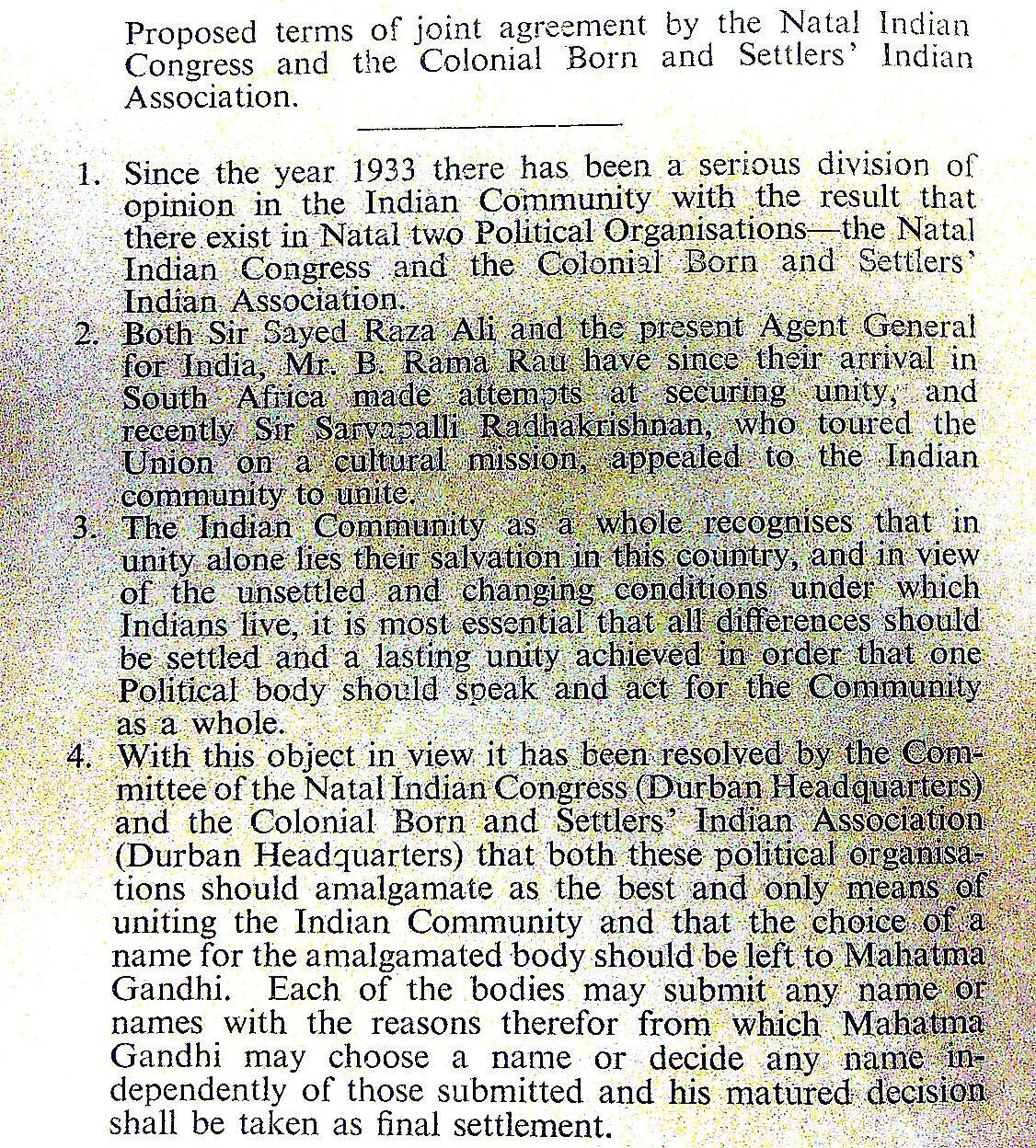 This was submitted to the Joint Secretaries of the NIC, A. I. Kajee and J. W. Godfrey, who circulated this to all officials, Members of the Committee and Congress Branches throughout Natal. At a fully representative meeting of the Committee convened at Durban on 30 April 1939, S. R. Naidoo moved the unity agreement for acceptance by the Committee, which was seconded by J. W. Godfrey.[10]

With the exception of a single dissenting voice, the proposals were adopted and referred to a Special General Meeting of the NIC for ratification scheduled to take place at the Durban City Hall on 4 June 1939. Copies of the proposals were circularised to all members throughout Natal.[11]

The meeting did not take place on the scheduled date, but was postponed to 11 June to accommodate A. I. Kajee (with SR Naidoo, Joint Hon. of the South African Indian Congress) who wanted to attend a mass of the Transvaal Indian Congress (TIC) in Johannesburg on that date.[12]

Kajee, in the interim, approached A. Christopher, the President of the CBSIA and made an overture to him to localise the issue rather than submit it to Mahatma Gandhi for arbitration and even suggested adopting the name the Natal Indian Association as a solution.[13]

Subsequently, Kajee made three proposals to the Congress Committee:[14]

Both the NIC and the CBSIA considered these proposals. Eventually both organisations appointed five representatives as Special Committee on each side, to discuss and bring the matter to finality and to report their conclusions to their respective bodies. This Special Committee met on 22 August 1939, discussed the amalgamation. At the same time a draft constitution was prepared and agreed upon and certain conclusions were reached by the representatives of both sides:[15] 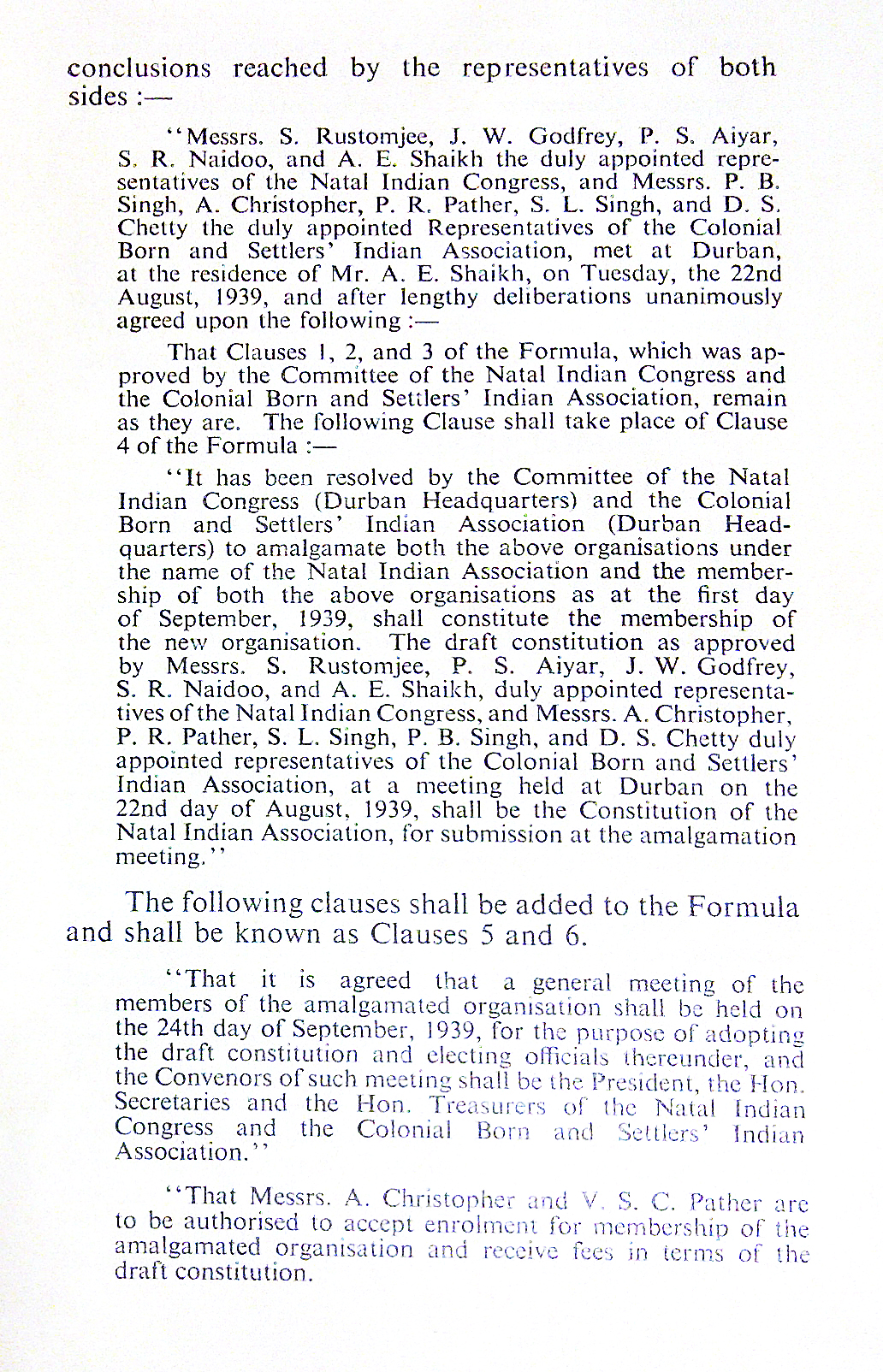 ConcIusions reached by the representatives of the NIC and the CBSIA

Immediately thereafter the Congress Committee met and approved the decision reached by the Special Committee and referred the issue for acceptance to the Special General Meeting of the NIC which, after a long delay, was advertised to take place on the 27 August 1939.[17]

At this time Swami Bhawani Dayal, the President of the NIC was in India in connection with the proposals of the Minister of the Interior, Richard Stuttaford, to segregate Indians. He was elected as President of the Congress in May 1938, and in accepting the office made a stipulation that he would serve in that capacity for one year only. At the time the unity proposals were adopted by the Congress Committee there was no mention of asking Swami Bhawani Dayal to return to Natal nor was it suggested that the consideration of the joint agreement should be delayed until he had returned.[18]

In order to meet Kajee’s wishes the Congress Committee agreed to hold the Special General and Annual Meetings on 27 August, 1939 by which time it was hoped that Swami Bhawani Dayal would have reached Natal.[22]  Kajee in view of the many postponements assured the Congress Committee that he would convene these meetings definitely on that date. No further postponement of these meetings was decided upon. After notice of these meetings had been circularised it was learnt that the boat by which Swami Bhawani Dayal was to have returned to Natal had been commandeered.[23]

At both the Annual and Special General Meetings held at Durban on the 27 August 1939, Sir B. Rama Rau, the Agent General for India was present and watched the proceedings and even at times counselled moderation to a batch of unruly members. After the preliminary work of the Annual Meeting at which V. S. C. Pather, Vice-President of the Congress presided had been completed, the election of officials took place. A list of officials and members of the Committee agreed to by Kajee was submitted to the Annual Meeting and carried. This course was adopted on the ground that the officials elected would use their efforts to see that unity was achieved.[25] 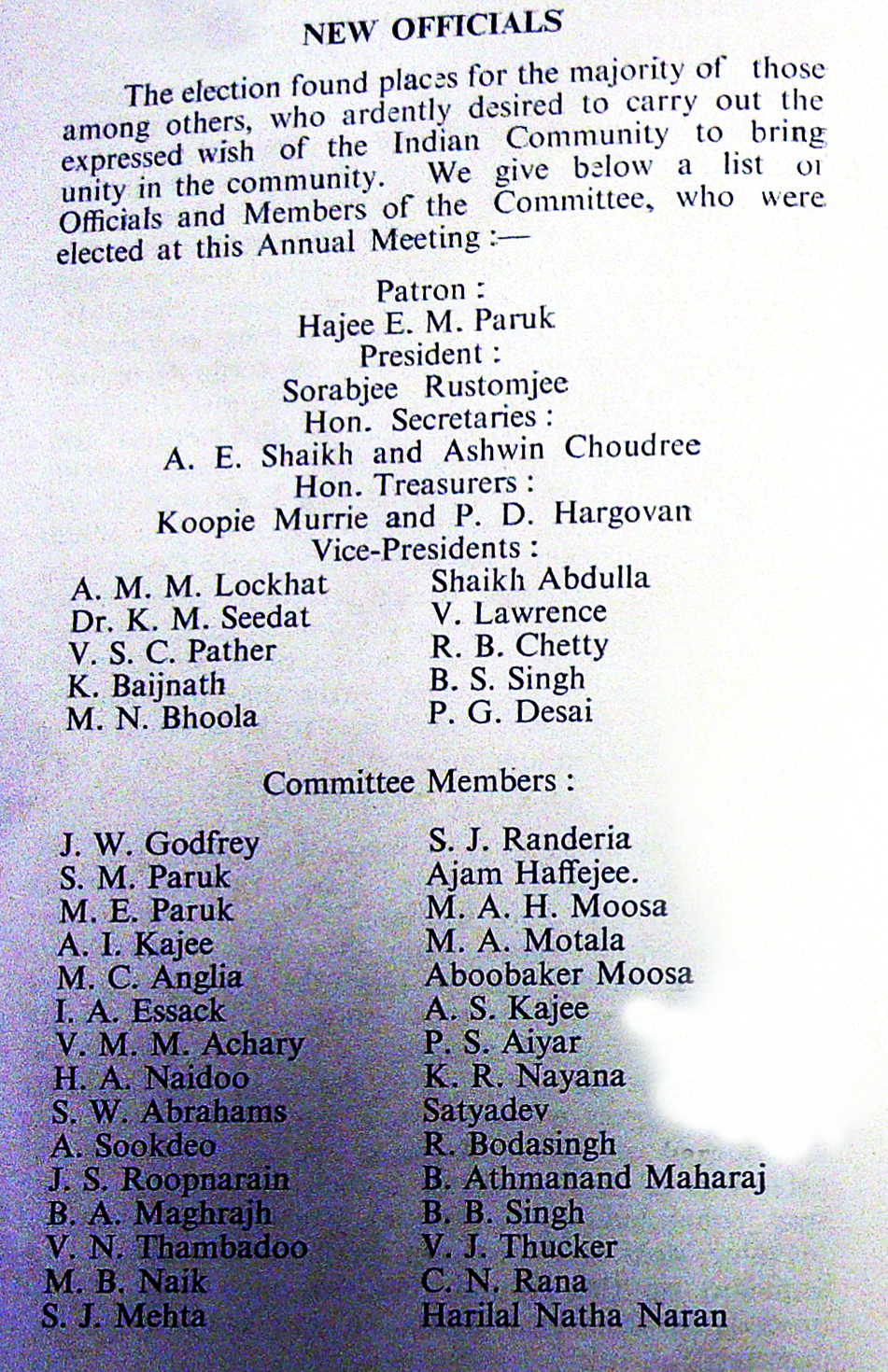 The Special General Meeting to consider the unity agreement immediately followed the Annual Meeting. The newly elected President, Sorabjee Rustomjee, chaired the meeting. S. R. Naidoo put forward his original proposals and as there was disorderly behaviour by a small organised crowd in the hall, Kajee, the former Secretary of the Congress, took upon himself to read to the meeting the text of the original proposals and also the subsequent conclusions reached by the Special Committee on both sides. Kajee urged the acceptance of the decisions reached by the Congress Committee and stated, ‘Constitution or no Constitution the meeting should give its fullest support to the unity agreement to amalgamate. The Agent General for India also appealed to the meeting to approve the action of the Congress Committee. S. R. Naidoo accepted the proposals as amended and moved them for adoption, which was seconded by Advocate J. W. Godfrey. The amended proposals were passed by an overwhelming majority.[28]

The amalgamation meeting of both organisations was held on 8 October 1939, at Curries Fountain, Durban at which 2,253 members were present.[30] This meeting, which Advocate A. Christopher presided, passed the following resolution unanimously:[31]

The final merging of the NIC and CB&SIA which opposed each other for six years, under the name of the Natal Indian Association, was welcomed by all as marking a new epoch in the life of the Indian community. However, this was not to be, for Kajee stated that he would not work with Christopher and his crowd — a point which he repeated on many an occasion.

At the amalgamation meeting of the NIC and CB&SIA on 8 October 1939 it was felt that officials of both organisations bodies be given positions in the NIA.[33]

The following persons were elected to as officials or members of the Committee.[34]

Hajee E M Paruk (Patron of the NIC) was elected to the same position in the NIA.

These members, on being notified of their election declined office, but did not resign from the amalgamated body. Immediately on the return of Swami Bhawani Dayal from India, in September 1939, some leading officials of the Congress gave him a full account of the proceedings that led to the amalgamation. Swami Bhawani Dayal stated that he did not like the change of name, but amalgamation having been effected; he would stand aside and devote himself to social and educational work.

The change in name (from Congress to Association) caused unhappiness among some members. Subsequently Swami Dayal became actively engaged in a ‘revival of the Congress’.

The effect of this amalgamation was that Congress ceased to exist as a separate entity.