When the First World War broke out in August 1914, the British Government called upon the dominions in the British Empire to come to its assistance. The South African Prime Minister, General Louis Botha declared his government’s wholehearted support for the defence of the British Empire.  The Union government was asked to send an army to conquer German-South West Africa.

Botha agreed to raise an army of the newly formed South African Defence Force, established in 1912. Before the invasion could take place Botha needed the support of Parliament. A special session of Parliament held on 9 September 1914 voted in favour of the invasion. The South African Party was supported by the Labour Party and the Unionists. Herzog’s National Party voted against the invasion. A number of high profile Afrikaner figures such as General Jacobus Herculaas de la Rey (known as General Koos de la Rey),  General Christiaan de Wet, Major J.C. Kemp   Commandant-General C.F. Beyers and Lieutenant-Colonel Manie Maritz  were against the invasion of South West-Africa(SWA).

When rumours began circulating that the government was planning to conscript civilians for the campaign, opposition amongst ordinary Afrikaners increased. Both Beyers and Kemp resigned from the army, and joined the others in urging Afrikaners into open rebellion against the government.

On 15 September 1914, de la Rey and Beyers left Pretoria for the military camp at Potchefstroom, Western Transvaal to have discussions with Kemp and other senior army officers. However, de la Rey was killed by a police patrol bullet when their car failed to stop at a police roadblock. de la Rey’s death heightened emotions around the SWA campaign, especially as it was suspected that he had been killed deliberately.

The day after his funeral and burial at Lichtenberg, about an hour and half drive from Potchefstroom, Kemp, Beyers and de Wet addressed a large crowd at Lichtenberg, calling on protest meetings against the invasion of SWA all over the country. When Maritz, commander of the military camp at Upington (Northern Cape) rebelled against the decision to invade South West Africa and, commandos were formed in the Orange Free State (OFS) and Transvaal.

On 22 October the leaders of the rebellion decided at Koppies that de Wet and Beyers would lead the rebels in the OFS and Transvaal. The rebel forces now numbered 7,000 in the Free State, 3,000 in the Transvaal and 2,000 in the Cape.

Botha had to postpone the invasion of SWA and concentrate on putting down the rebellion. On 12 November 1914, de Wet, who led the rebels in the OFS, was defeated at Mushroom Valley, north-east of Bloemfontein.  He was eventually arrested near Kuruman, Northern Cape while fleeing.

Beyers’ force in the Western Transvaal was also defeated on 16 November and he drowned in the Vaal River while attempting to escape with a few of his men. Jopie Fourie  still held on near Pretoria, and succeeded in dealing government troops a considerable blow. He eventually surrendered on 16 December, and was court-martialled and sentenced to death. He was executed on the 20 December.

Maritz and Kemp still fought on in the North–Western Cape, but succumbed to government forces on 2 February 1915. Kemp was jailed along with other rebel leaders while Maritz fled to German South West Africa.

The mobilisation of Union troops to deal with the Rebellion (Photo: By courtesy. South African National Museum of Military History).

Socio-economic background to the 1914 Rebellion

The 1914 Rebellion against the Union government has generally been seen as an example of the resurgence of Afrikaner nationalism and a desire to return to the pre-Anglo-Boer War days of the independent Boer republics. In this understanding the immediate cause of the rebellion was the Union Government’s decision to send troops to invade German South West Africa on behalf of the British Government.

Historian Sandra Swart, however, has strongly contested this interpretation. She argues that this view of the 1914 rebellion is informed by a perspective that looks at the rebellion solely in terms of those who led it, such as wealthy farmers, civil servants and a number of builders and contractors (Swart: 2000:161). Historians have generally neglected the motivations of the rank and file participants in the rebellion. These were made up primarily of poor, destitute farmers and bywoners (poor tenants on farms).

According to Swart, this group’s social position within Boer society on the platteland (rural areas) had become progressively eroded as a result of transformation of the social relations in agriculture. The discovery of minerals led to increasing capitalisation of agriculture and after the Anglo-Boer War, an increasing division between wealthy landowners and bywoners developed. The latter was also being displaced by Black sharecroppers who were often preferred by wealthy farmers.

The ownership of land among poor farmers became increasingly tenuous as many were forced to sell their land in fertile areas and move to cheaper land in arid regions, or when they failed as a result of drought, plagues, disease, to sell their labour in the gold mines on the Witwatersrand or become railway workers. (Swart: 2000: 166).

According to Swart, these men were desperate to return to the land and hence a restitution of their identity as farmer and patriarch. Stirred up by nationalist rhetoric of re-establishing the old Boer republics, these men heeded the call to rebel in the hope of reclaiming their land. It was easy to gain their support as the Botha and Smuts government, despite numerous investigations into the ‘poor white problem’ had rejected measures of amelioration.

The 1906 Transvaal Indigency Commission argued against government intervention in the form of relief efforts such as debt moratorium, job fixing and government grants of and cattle to assist the returning ‘poor whites’ to the land. Although poor relief efforts in the form of employment projects were introduced after the Anglo-Boer War, these were unpopular as they meant giving up rights to the land. Many poor Whites saw poor relief efforts as temporary measures that would assist them in regaining ownership of land.

In 1912 the Land Bank also announced that it would no longer make loans available to non-landowners (Swart: 2000: 170). Swart notes that areas of rebel strongholds were those such as Kopjes, where people were dependent on poor relief schemes.  (Swart:2000:171).

The loss of land did not just have economic consequence- it resulted in a profound loss of identity. Proletarianisation and urbanisation meant a loss of status as farmer, patriarch and provider, and living in squalid urban conditions earning a meagre wage.  While the rank and file participants of the rebellion were drawn from the ranks of poor farmers and bywoners, the leadership of the Rebellion was drawn from wealthy notables and men who wielded influence as a result of their iconic status as heroes of the Anglo-Boer War. These notables wielded power and influence in the old Boer republics as a result of their wealth and political office in the governments of the Boer Republics.  Their motives for leading a rebellion were very different from the rank and file.

In the post Anglo- Boer war and the formation of union, the Milner administration attempted to co-opt the old Boer landed aristocracy into the administration of government and introduced measures to encourage them to capitalise.  But not all members of the old landed ruling class accepted the new dispensation and yearned for a return to the old patriarchal hierarchy in which they wielded power and influence, not only over the state, but over poor farmers, bywoners and Black sharecroppers. The modernising Union state eroded the old republican order based on patron client relationships and a highly personalised, local patriarchal from of power and authority. (Swart: 2004: 4-5)

In the old Boer Republics, the veldkornet functioned as a link between the people and the state. He was the symbol of local authority, elected by the community, he was a vehicle for communicating grievances at local level; he played the role of a protector, often looking after the indigent, in particular widows with children. He was responsible for the administration of justice, health, maintenance of roads and management of contagious diseases. It was a position that allowed for upward mobility, often allowing them to accumulate property.  Both Louis Botha, Premier of the Union, and rebel leaders de Wet and de la Rey were veldkornets. (Swart: 2004:3-4) 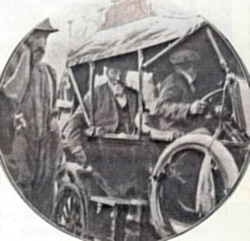 With the formation of Union, the role of the veldkornet was replaced by a modern bureaucracy of appointed officials with no roots in local society. The status of the veldkornet was also dependent on his status as landowner and his duties as a veldkornet placed him in an advantageous position for accumulating land. The new modernising Union state undermined this position and hence his authority and power. Many of the ex-veldkornets formed the second tier leadership in the rebellion. They wielded powerful influence as a result of their direct contacts with farmers on a local level, and their direct line of access to iconic leaders such as de la Rey. It was this layer that was able to draw their supporters into the rebellion. As local patriarchs they commanded a huge amount of loyalty amongst local farmers and impoverished bywoners.  It was this layer of leadership that was able to activate the old kinship networks of the commandos of the Anglo-Boer War. The relationships within these commandos mirrored the familial patriarchal system of the Boer family where the leader of a commando were regarded the father figure of the younger members. In some cases many of the commando members were made up of close relatives and friends, strengthening the bonds of loyalty. (Swart: 2004: 4)

Responses in South Africa to the outbreak of WWI: The Afrikaner Response and the 1914 Rebellion
World War I
General Galleries