Unesco declared Robben Island in the Western Cape a World Heritage Site in 1999. Robben Island is located in Table Bay, some 6km west of Bloubergstrand, and stands some 30m above sea level. Robben Island has been used as prison and a place where people were isolated, banished and exiled to for nearly 400 years. It was also used as a post office, a grazing ground, a mental hospital and an outpost.

Initially the island was inhabited by a variety of wild life, including birds, penguins, seals and tortoises. Its name "robben" is derived from the Dutch, meaning a seal. It also had a plentiful supply of fresh water available from a number of springs. Batolomeu Dias, the Portuguese explorer, 'discovered' the island in 1488 when he anchored his ship in Table Bay.

Before 1652, In place of dealings with the indigenous residents on the mainland, most visiting ships to Table Bay preferred to land on Robben Island to replenish their supplies of fresh water and meat. As a result it also became a major point for the exchange of mail, where letters from an outgoing ship would be left underneath an inscribed stone for collection and delivery by a home-going vessel. This continued after Jan van Riebeeck arrived at the Cape in 1652, as he had to settle a station where ships that were travelling from Europe to the East Indies, he did not want to stop on the mainland, could get fresh food and water. There were plenty of seals, tortoises and penguins for hunting. The Dutch also began to use the island as a grazing station for sheep and cattle. Prisoners lined up on arrival at Robben Image source

However, the islands potential as a convict station did not go unnoticed, and in about 1671 the Dutch began to place their convicted criminals upon it. It was only a matter of time before this courtesy was extended to political prisoners and other "undesirables" banished to the Cape from other Dutch colonies. In fact the Dutch government sent kings, princes and religious leaders from the East Indies to Robben Island as prisoners because they did not agree with the Dutch rule in their country.

When the British annexed the Cape in 1806 they continued this practice. During the first British occupation of the Cape, from 1795 to 1802, whaling activities were begun in Table Bay, and after their return in 1806 a whaling station was located on Robben Island. However it soon became apparent that this offered convicts an easy escape route, and it was closed down in 1820.

In 1812 the first attempt was made to use the island as an asylum for the mentally ill, and in 1843 the Colonial Secretary, John Montagu, put forward a plan to use it as a colony for lepers, paupers, the mentally unfit and the chronically ill. The plan also provided for the removal of the penal colony to the mainland where convict labour could be used more productively on government projects, such as road-building. This plan was accepted and by 1845 the island had become a home for the Colony's unwanted and unloved, those deemed to be 'mentally ill' in those days could include the homeless, alcoholics, people who were to sick or old to work and prostitutes with sexually transmitted diseases. Those unfortunates were often subjected to treatment, which was unhealthy and inhumane even by the standards of that time, and conditions on the island became the subject of constant complaint from progressive clergy and medical staff. Although some improvements were implemented over time, the island's lazaretto was only closed down in 1931.

The lighthouse on Robben Island was commissioned in January 1865. The circular tower, designed by the Colonial Engineer, John Scott Tucker, was built in stone quarried locally, and stood 18m high. The 1875 census indicated that Robben Island had a population of 552. In 1891 this number had risen to 702, and by 1904 it stood at 1,460. 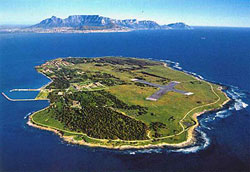 Aerial view of Robben Island with Table Mountain in the background.

After 1931 all the 'patients' were sent to hospitals in the Cape and the island began to be used as a military outpost before WW II. Guns were stored there and the government built roads, a power station, a new water supply and houses.

In 1961 it started being used as a prison again. During apartheid many Black people were kept on Robben Island as political prisoners. Former President Nelson Mandela was kept there. The prison internationally notorious for its harsh conditions and when the political prisoners of the apartheid government were released Robben Island became a symbol of the strength of the human spirit.

Robben Island was declared a World Heritage Site because the buildings on the island are a reminder of its sad history and because the same buildings also show the power of the human spirit, freedom and the victory of democracy over oppression.