1910
First general election that followed the establishment of the Union of South Africa. Only White males had the right to vote.
1915
Second general election in which the main issue was South Africa’s participation in World War I.
1920
The post WWI crisis shaped the conduct and outcome of this election. The National Party of Hertzog, formed in 1914, won the most seats, forcing the South African Party into a Fusion with the Unionist Party, and the latter being disbanded.
1923
This election was forced on the government by the expression of no confidence in Smuts’s policies. The outcome led to a PACT between the National Party and the Labour Party.
1929
This election was centred on strategies of dealing with the crisis occasioned by the Great Depression. It led to the collapse of the PACT government and the National Party won the election.
1933
The SAP which had become the UP and the National Party formed a Coalition that governed until the outbreak of Worlds War II in 1939.
1938
The war issue was the focus of this election. The majority of white voters seemed to agree with South Africa’s participation in the war, leading to Hertzog and his National Party being marginalized. It also marked the beginning of the end of Hertzog’s political career.
1943
The UP led by Smuts once again won the lection but the National Party showed signs of growing.
1948
The historic election that brought the party of Apartheid policies, the Nationalist Party to power.
1953
An election that returned the NP to power, emboldening it to pass some of the most draconian measures of the decade.
1958
This is an election that made the architect of apartheid, H. F. Verwoerd the Prime Minister. 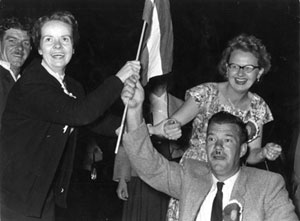 History of elections in South Africa