In July 1967, the University Christian Movement (UCM) held its founding congress in Grahamstown, with about 90 clergymen and students in attendance. The congress elected an executive committee of ten people, with Basil Moore as president. The executive included Colin Collins, Winifred Kgware, and several African, Coloured and Indian members. The movement grew rapidly, setting up 30 branches at seminaries, universities and teacher training colleges, and by the second congress in Stutterheim in July 1968, 60 percent of the delegates were black.

In retrospect, the significance of the UCM, which remained in existence for a mere five years, was its crucial role in giving birth to a movement that would kick-start the dismantling of apartheid – the South African Students Organisation (SASO). The UCM was from its inception a Christian student movement far more radical than any other student organisation in the country. With the National Union of South African Students (NUSAS) undergoing a rightward shift, and the Christian Student Association degenerating into a segregated federation, the UCM gave black students the space, resources, and intellectual and moral support to launch their own black-led organisation, SASO.

Factors that led to the emergence of the UCM

In 1964, NUSAS, the national student body, had become a terrain of contestation after its president, Jonty Driver, delivered a speech questioning the role of the organisation. Driver argued that the white-dominated organisation should ideally be led by black students, but he also expressed concerns that the body would be weakened if it broke away from its white student base. The speech was leaked to the press, and was perceived to be an attempt by radicals to take over the body, resulting in Driver’s censure and a rightward shift over the next few years. The students now took a more conciliatory stance, presenting NUSAS as a liberal, multiracial body, and tempering its protests against the apartheid regime.

Two years later, Steve Biko, in his first year of medical studies, was selected as an observer delegate to the 1966 NUSAS conference. Black students – Africans, Indians and Coloureds – made up only a quarter of the delegates to the conference, and their radical stance was rejected by the more conservative White students. When they proposed a motion to halt the rag parades – annual fund-raising events – until they could be staged as non-racial events, they were voted down.

At the next congress at Rhodes University in Grahamstown in 1967, the black students found that, in accordance with a government ruling, they were not allowed to reside on the campus, which was reserved for the white students. Outraged, they proposed that the conference be suspended until a non-racial venue was found. Once again, they were outvoted, precipitating moves towards the formation of a separate Black student body.

Their defeat prompted the Black students to hold a Blacks-only caucus in their segregated sleeping quarters, where the idea of a Blacks-only student body was hatched.

The Black students also felt that they were not given the opportunity to express their views, and that the White students were quite oblivious of this imbalance. The White students dominated the discussions, and made all the decisions.

The conference was in stark contrast to the UCM’s founding congress, which the black students attended after the NUSAS conference. At the UCM congress, Black students dominated the discussions, some had been voted onto the executive committee, and the ideological orientation was influenced by new ideas derived from the Black Theology of James Cone and the Brazilian educationist, Paulo Freire, in literature disseminated by Basil Moore and Colin Collins.

In the early years of apartheid, the majority of Christian associations at tertiary institutions were denominational bodies, all represented in the interdenominational Student Christian Association. Despite this apparent unity, the SCA was divided into four chapters, one each for Africans and Coloureds, White English speakers and White Afrikaans speakers. After the World Student Christian Federation called on the SCA to reject segregation, the SCA withdrew from the federation in 1964, and the association split up into four separate racial bodies.

However, certain Anglican and Catholic students, together with liberal students, joined forces to launch an interracial and ecumenical body, resulting in the birth of the UCM. The initiators of the UCM were influenced by the deliberations of the Second Vatican Council, held from 1962 to 1965, which sought to align the Christian world with modernity. They were also influenced by the Liberation Theology sweeping across Latin America and Afro-American churches in the US, especially the works of Brazilian education theorist Paulo Freire and the Black American theologian James Cone.

The UCM in Full Swing

Following the first congress, the UCM organised multiracial holiday camps, encouraging students to live together and express their critiques of apartheid. The UCM, in contrast to student bodies too petrified to challenge apartheid structuring, began with the premise that apartheid was an abomination.

It reached out to the Black campuses, and its gatherings were predominantly Black, resulting in an atmosphere vastly different from the white-dominated NUSAS conferences. Black students felt free to express their views.

The UCM cultivated links with overseas-based organisations, including the US-based body also called the University Christian Movement. Basil Moore and two Black students travelled to the US in December 1967, and raised money to fund the UCM. The UCM managed to secure funding from other organisations abroad, and by the end of the decade 87 percent of their budget was from overseas funding.

Moore and Collins were steeped in the discourse of Liberation Theology, and disseminated the new movement’s literature in their home country. They published a magazine, One for the Road, which carried these new ideas.

The UCM introduced innovative methods of training young students at gatherings they referred to as ‘formation schools’. They used the ideas of Friere to ‘conscientise’ the students, imparting techniques of literacy to interpret their experiences in their own terms and extrapolating these to the wider world. According to Dan Magaziner, Freire taught that ‘all oppressed people needed to develop their own critical faculties rather than have some vanguard force an ideology upon them’.

To popularize their ideas and attract a following UCM initiated a number of literacy programmes targeting black workers, particularly in the Durban area.

Barney Pityana, one of the leading figures of UCM who became a founder member of SASO, July 1982, Drum Photographer, from the Baileys African History Archive, Permission: Africa Mediaonline, www.africamediaonline.com

With 30 branches established by the end of its first year, the UCM grew rapidly. At the University of Fort Hare, students initially refused to participate in the Student Representative Council (SRC), fearing harassment by the campus administration. Instead, they reconstituted themselves as a branch of the UCM in the Eastern Cape, which was headed by Barney Pityana.

The branch received support from the Federal Theological Seminary of Southern Africa (FEDSEM), located close to Fort Hare. Figures such as Desmond Tutu, Simon Qgubule and Aelred Stubbs delivered lectures to the students.

On 27 August 1968 the University of Fort Hare’s new rector, Professor JJ de Wet, rejected a request by Barney Pityana and Justice Moloto and others for recognition. This resulted in a non-violent strike which was broken by the deployment of the police on campus. Consequently the university cancelled the registration of all students, forcing them all to re-apply for admission.

When Steve Biko and other Black students attended the NUSAS congress in July 1967 in Grahamstown, they stayed on to attend the founding UCM conference, and began mooting the idea of a Black student organization. 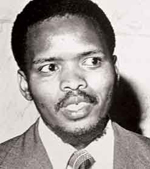 Steve Biko was a leading figure in mooting the idea of forming a Black student organisation. www.andiquote.co.za

Biko had found allies in Barney Pityana from Fort Hare, Harry Nengwekhulu and Petrus Machaka from Turfloop, and Goolam Abram from Wentworth, and the group began recruiting like-minded Black students throughout the country.

In December 1968, they held a consultative meeting at Marianhill, and in July 1969 SASO held its inaugural conference at the University of the North, outside Pietersburg, and Biko was elected its first president.

According to Karis and Gerhart, SASO’s relationship with the UCM was a crucial factor in its survival when it began. They further assert that Biko and Pityana used the UCM conferences as a recruiting ground, and developed a close relationship with Colin Collins and Basil Moore. They continue:

‘Despite their personal commitment to interracial cooperation, Collins and Moore recognised that until Blacks could organise and lead their own challenge to the apartheid system, any political efforts by liberal whites would be unavailing. When full-time UCM staff positions were later taken up by Justice Moloto, Chris Mokoditoa and Stanley Ntwasa, no barriers were imposed on their close association with SASO. Quietly but deliberately, the UCM became an inconspicuous but vital organisational backstop to SASO, providing financial and logistical support, contacts with potential overseas backers, and an expanded network through which political literature could be obtained and circulated among student activists.’ (Karis and Carter, p.g 97)

The Demise of the UCM

After Collins posted a copy of One for the Road, the UCM magazine, to William Kgware, the husband of Winifred Kgware, Collins was charged with disseminating prohibited literature. The UCM was barred from holding meetings at Black tertiary institutions, including Turfloop, Fort Hare, Ngoye and the University of the Western Cape.

Moore’s passport was confiscated, and Collins, facing a military call-up, went into exile in 1971. Moore followed him a few months later after he came under a banning order and house arrest. Justice Moloto and Stanley Ntwasa were also banned.

By mid-1972, the UCM executive disbanded the organisation and bequeathed its assets to SASO.

As early as August 1968, Prime Minister John Vorster warned that he would investigate the UCM, saying that ‘when I have finished it will not be my fault if steps are taken against this movement’.

In 1972 the government established a Commission of Inquiry – consisting of six National Party (NP) and four United Party (UP) members of parliament under the chairmanship of Alwyn Schlebusch – to investigate the ‘organisation and functioning of the National Union of South African Students, the South African Institute of Race Relations, the University Christian Movement, the Christian Institute of Southern Africa and any related organisations, bodies, committees or groups of persons’.

Despite the UCM’s disbanding, the inquiry into its activities continued. In 1975 the Commission presented its findings to Parliament. The Commission concluded that the now defunct UCM had engaged in activities that were hostile to the government.

The UCM, despite its innocuous facade, proved to be a crucial factor in the resurgence of political resistance to apartheid after the Sharpeville massacre and the subsequent crackdown on political activity. It introduced a new discourse, one that allowed for a radical reinterpretation of the role of the Black activist, and provided an enabling environment for the birth of SASO and the Black Consciousness Movement. The self-effacing White leaders of the UCM, in contrast to NUSAS leaders, brought about a new understanding of the role of the White liberal, one which enabled their acceptance of the possibility of Black leadership.