Farming is the practice of breeding animals or growing crops for food or clothes. Human ancestors stopped relying on hunting and gathering for food and began farming about 10 000 years ago. This change affected the way society worked as people began living in larger groups because of the availability of food. Towns and cities developed and people had to learn new skills for living in a larger group, like trading extra food, building roads to travel on, finding different ways to transport things and ways of communicating between groups.

Who were the African farmers?

The African farmers who moved to southern Africa were Bantu-speakers.  They are the ancestors of many South African people. Like the hunter-gatherers and herders, they also arrived here hundreds of years before any Europeans did.

These farmers brought more new ideas and skills to the east of southern Africa, just like the Khoikhoi and their herds of animals. They introduced crop cultivation, metal tools, Bantu languages and village life to the eastern part of the country. It is believed that they came here because this was a summer rainfall area, which is good for growing crops.

The ox-plough not only changed farming techniques, but also the role of women in communities. Source: http://www.ls.net

African farmers lived in larger communities than the San or Khoikhoi because more people were needed to look after herds of animals and to work the land. The areas they lived in could also support larger groups because it wasn't as dry and hot as the western part of southern Africa. They built their villages around a cattle kraal and were ruled by a chief or king.

Crop farming was new to the area and the earth was fertile. Most of the farmers only planted and harvested enough food for them. The men still hunted, but also herded cattle, goats and sheep. Crops provided daily food and were essential to the farmers' survival. It was the women's work to tend the fields. Men helped them to clear the ground and tools like the hoe; and later the ox-plough made the work easier.

The ox-plough was brought to southern Africa by European settlers and it replaced the hoe as a tool to clear the ground. It also changed the society of African farmers. The plough had to be pulled by oxen, but women were not allowed to handle cattle. This meant that the women could no longer work in the fields and that men could take over that job. This weakened the position of women in this society.

The plough also made it possible for farmers to plant more crops, but this would require more land. The land belonged to the community and some members had the right to plant and harvest crops to feed the group. Some farms were larger than others, but everyone had a right to land.

Cattle was important to African farmers because they were so useful. They were a symbol of riches and power and were used as “lobola”, or bride price. Sources: www.zakerna.homestead.com

African farmers had much larger herds of cattle than Khoikhoi farmers, but their animals were also very important. The cattle didn't belong to the group, but were the property of individuals. They were a symbol of power and wealth because they provided milk and meat, skin for clothes and horns for containers. Their droppings were used as fuel for fires and for plastering walls and floors in houses. They were used as a form of money to pay fines. They were also used to pay “lobola” (bride price). When a young man wanted to marry a girl he would have to give the girl's father a certain amount of cattle.

Where did they come from?

African farmers arrived in southern Africa around 250 AD, which is about 1 000 years ago, from further north in Africa. They were Bantu-speaking people and lived in an era that archaeologists call the Iron Age.

For a long time many people believed that African farmers arrived in South Africa at the same time as European settlers, but new research proves that they were here hundreds of years before the Europeans. 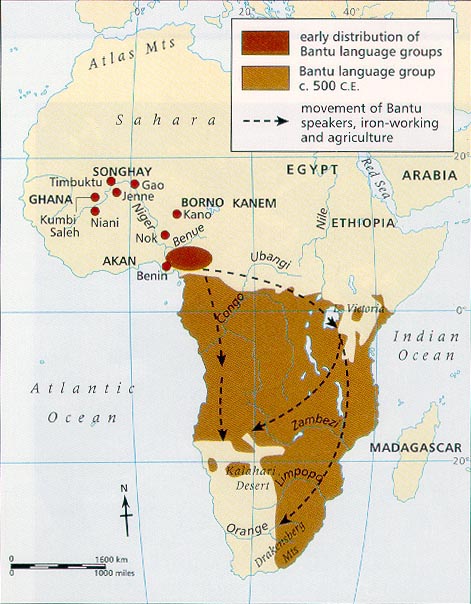 Evidence shows that  there was  contact between the hunter-gatherers, herders and farmers in southern Africa. There is evidence that the African farmers traded with the other two groups and even hired some of them as hunters and herders. They paid them in beads and animal hides. Some of the farmers even married Khoikhoi and San partners and their languages mixed. That's why some Bantu languages, like Xhosa, have clicks similar to the Khoikhoi and San languages

Where the farmers settled

The hunter-gatherers were nomadic and never stayed in one place for very long. The Khoikhoi were herders of animals and settled in one place for a long time before moving on. Around 2000 years ago, many grain farmers from East and Central Africa moved to what we now call Southern Africa. The new farmers brought many different skills with them, such as farming of crops. They believed the land should be used for planting food. These farmers took three different routes:

How the farmers lived in settled chiefdoms

The early farmers lived in small villages and produced everything that they needed themselves. A village consisted of groups of huts called ‘kraals’, which were arranged around a cattle enclosure. The huts were made of clay and the roofs were made of thatch. The floors were smeared with cattle dung. The villages were called homesteads. An elder or headman led the homestead. His hut was opposite the main entrance and his most important wives had huts nearest to him. Each chiefdom (consisting of several homesteads) was ruled by a chief. Often it was the wealthiest man who became the chief. He was supported by a council of elders and warriors who protected the land, the crops and the people. The chief made decisions for the people. The council of elders made sure the chief took into account the needs of the people and that he had listened to everybody’s opinions before making a decision.

A sangoma used plants as medicine. Often, these traditional healers would play drums and dance to assist in diagnosing an illness. The sangoma would try to heal people by working with both their minds and bodies. The sangoma would also perform rituals to contact their ancestors, asking them to guard their land or to provide a good harvest.

The early farmers grew crops and this shows that, unlike the San and the Khoikhoi who were always moving around, they lived more settled lives. They grew crops on small pieces of land where they lived. On this land, they grew watermelons, pumpkins, beans, mealies and sorghum. These crops needed summer rainfall, so they lived in parts of the country where there was sufficient rainfall. Their cattle were their wealth. Cattle provided them with milk and meat. They made butter from milk. When a man wanted to marry a woman, he would donate cattle as lobola to her father. Cattle could be exchanged with traders for other items they needed. They used cattle skins to make clothes, thongs, bags and shields. Cattle dung was used for making floors for huts and for fuel to make fires. Sheep and goats were also kept in the kraals.

A culture of co-operation

The San, Khoikhoi and early farmers started trading with one another. Slowly over time, the African farmers married into the San and the Khoikhoi tribes. The ‘click’ sounds that are so prevalent in the San and Khoikhoi languages were also integrated into Zulu and Xhosa. Sometimes there was conflict between the San, Khoikhoi and the early African farmers over issues such as cattle drinking too much water or the farmers using too much of the land for crops. We see this conflict illustrated in the rock paintings of the San. Sometimes, this was resolved by the San and the Khoikhoi bartering with the farmers.

Tools and weapons made from iron and copper

The farmers knew how to extract iron and copper from rock and they built furnaces for this process. These furnaces were made hot by using bellows made from animal skin to blow air into the fire. They were very hot and separated the iron ore from the rock. The farmers made the furnaces. This was called smelting. This iron was then reheated so that it became soft, after which it was hammered and made into a useful tool. This was called forging. Tools, weapons and ornaments were made from these metals. These tools were very important to the farmers. They needed axes to cut down trees and hoes to break up the soil, weed the fields and harvest their crops. Their weapons were arrowheads, knives and spears.