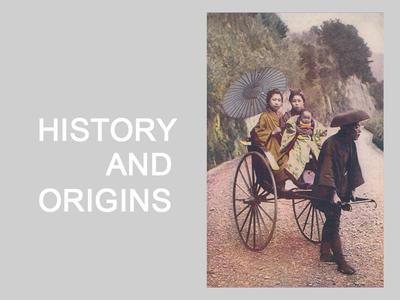 The jinriksha, or ricksha, as it is more commonly referred to, originated in Japan during the 1870s. Its invention has variously been attributed to an American missionary who needed to get his infirm wife about, an American businessman, or two Japanese coach designers. Certainly, by the 1920s, missionaries were claiming firm credit for its introduction into Japanese society, and were offering it as an example of their “civilising mission.“ The name originates from the union of three Japanese words: “jin”, meaning “man”, “riki” meaning “power”, and “sha” meaning “carriage” or vehicle. United they could be translated to mean a “man powered carriage”, although other forms of man-powered transport apparently also qualified for the name. Within a few years the use of this two-wheeled vehicle had spread into other countries in south-east Asia with a surplus of man-power and a shortage of jobs in the private sector. By the turn of the nineteenth century they had become a familiar feature of life in China, Hong Kong, Singapore, Malaysia, India, Bangladesh and Sri Lanka.