In 1959, Legae studied in the Polly Street Art Centre, one of the first places to bring artists from different areas under one roof. During the 1950’s, it became the cradle of the first professional African Artists whose art was mainly concerned with the social conditions of their segregated settlements. Legae then studied with Cecil Skotnes and Sydney Kumalo at the Jubilee Art Centre from 1960 to 1964. He became a teacher at the centre in 1965 when he took over Kumalo’s post as assistant to Skotnes.

Legae received a scholarship from the US-SA Leadership Development Programme (USSALEP) to travel to Europe and the United States in 1970. In 1972, he was awarded a Bursary from the Merit Grant Fund, USA. From 1972 to 1974, he was director of the African Music and Drama Association Art Project. From the mid-1970s until his death in January 1999, Legae lived in Soweto, Johannesburg, with his family and worked full time as an artist.

Legae is best known for his powerful visual commentaries on the pathos and degradation of apartheid - a critique he extended to the persistence of poverty and racism in the post-apartheid years. He excelled as painter and sculptor of figures, heads and animals working with oil, conté, bronze, clay and mixed media.

As is evident in his art, Legae acknowledges that he was greatly influenced by both Cecil Skotnes and Sydney Kumalo. Both these teachers introduced and guided him to explore various mediums. Other great sources of influence to the artist were his experiences abroad, and his identification with the human situation in general - particularly that of his own people.

His works include the Dying Beast Series (figure 1 and 3), completed during the political transition in 1993. In an interview with ‘Insight’ (an exhibition he was part of) commenting on his role in a democratic South Africa, Legae said “I will continue to talk about things as I see them. People can change, but masters cannot. Change doesn’t happen overnight”. This commitment is born out in his painting, Icons de Dakar ‘Africa’ (figure 2).

Legae’s work is represented in various private and national collections including the South African National Gallery.

For my friend Ezrom

A tribute from Linda Givon, director of the Goodman Gallery

Thirty years of working together through the heaviest time in a country shattered by the cruelest and most devastating destruction, a nation's deconstruction and reconstruction.

You taught me how to look across the wall at the people who were so desperately subjected to unspeakable horror. Your sensitivity which leaped perception as a human being as well as an artist who touched my heart and my soul. Your courage in a time when nobody dared to speak out in 1979 with your homage to Steve Biko and in 1980 with Freedom is Dead. Your sculpture of burnt flesh and necklaced people, tortured but always lyrical with a sense of poetry and deep sensitivity. Your warm sense of humour, usually with a twist of irony and often ending in tears. Your compassion and love for your fellow man, your total dedication to your children and grandchildren. Your humility as an artist. All these make the memory of a complete all-round man who will always remain as one of the treasures of our nation.

It was fitting that you were chosen to present our great President Nelson Mandela with a bronze sculpture on his stepping down as head of the ANC. You have enriched my life and those of many others.

Bayete. Goodbye brother. May your spirit be free at last. 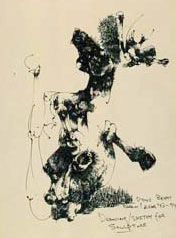 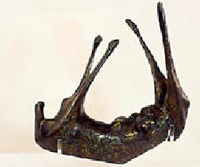