Jafta Kgalabi Masemola, “The Tiger of Azania”, also popularly known as “Bra Jeff” by many others, was born at Bon Accord near Pretoria on 12 December 1931. He lost both his parents at an early age and was raised by his sister. The family moved to Marabastad and then to Atteridgeville in 1942 where he enrolled at De Jong Primary School and completed standard six in 1947. He proceeded to Hofmeyr Secondary School where he obtained a Junior Certificate in 1950. Then he went to Kilnerton Training Institution (KTI) where he completed his Teacher’s Training Certificate.

In 1958, he joined the African National Congress Youth League. In 1959, he joined the Pan Africanist Congress (PAC) of Azania at its inception and was one of its founding members. He intertwined lessons with political education, thus influencing some of the children and as well as his colleagues at his school. As a result, some of his pupils became members of the PAC when they got to high school and were later incarcerated with him on Robben Island in 1963. 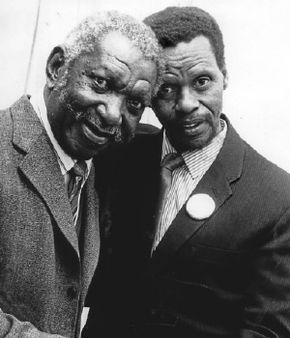 Late PAC president Zephania Mothopeng and Jeff Masemola, who was the longest-serving prisoner on Robben Island.

After the banning of the PAC on April 8, 1960 under the Unlawful Organizations Act, Masemola and other PAC operatives others were sent out of the country to set up the PAC’s underground guerrilla structure, Poqo in Lesotho. The formed underground structure planned an armed revolt in 1963. They gathered whatever weapons they could find for the planned uprising. The security police uncovered these activities and Masemola and other activists were arrested during a swoop on PAC-Poqo suspects on the night of 21 March 1963.

In June 1963 Masemola appeared in the Pretoria Supreme Court along with 14 others and was charged with conspiracy to commit acts of sabotage and with intention to overthrow the government by violent means. He was convicted and sentenced to imprisonment on Robben Island in 1963.

He spent over 26 years on Robben Island and other prisons. On the Island, Masemola, had access to workshop tools, including a grinding stone. Together with another prisoner, Sedick Isaacs, he devised an escape plan. Masemola crafted a copy of the cell master key, which allowed him to 'sneak' around at night. The plan was to steal medical supplies from the dispensary, dope the wells and put the wardens into deep sleep. Unfortunately, information about the plan was exposed when a common law prisoner leaked the information to the prison wardens. They raided the cells and discovered the key. Both men had an extra year added to their sentence.

Masemola was released on 15 October 1989. On the eve of his release, Nelson Mandela asked to have a meeting with him. Masemola was flown from Johannesburg (Leeukop Prison) to Victor Verster Prison in Cape Town to meet Mandela. Nothing has ever been disclosed about what transpired in that meeting. At his homecoming reception in Atteridgeville, the Super Stadium was filled to capacity. The police intervened and ordered the people to disperse before the function could end.

Following his release, Masemola immediately plunged into active politics.  He used a church opposite where he lived on 26 Makgatho Street to address masses of people who came to his meetings every evening. The church belonged to Rev. Brander whose son Simon Brander died on Robben Island convicted as a PAC-Poqo activist. Masemola travelled the length and breadth of the country reviving PAC structures. He intervened in conflicts between the PAC and the United Democratic Front (UDF) members.

On 17 April 1990, Masemola was killed in a car crash under what the PAC considers were suspicious circumstances. The truck that was involved in the crash with Masemola’s car fled the scene and was never found.

In 2003 President Thabo Mbeki conferred the Order of Luthuli in Silver, posthumously, on Masemola for dedicating his life to the struggle against apartheid and standing for the ideals of a free, just and democratic South Africa.