Skip to main content
Hidden from the visibility of the Coastal Road and vicinity of the wind, Clifton is a secluded collection of four Beaches naturally divided by Boulders and Rocks. Taking a stroll across all Beaches is easily accomplished despite these Natural scattered Beach Borders. Clifton is also known as 'Masbieker Beach' from the Slave Trade Days! 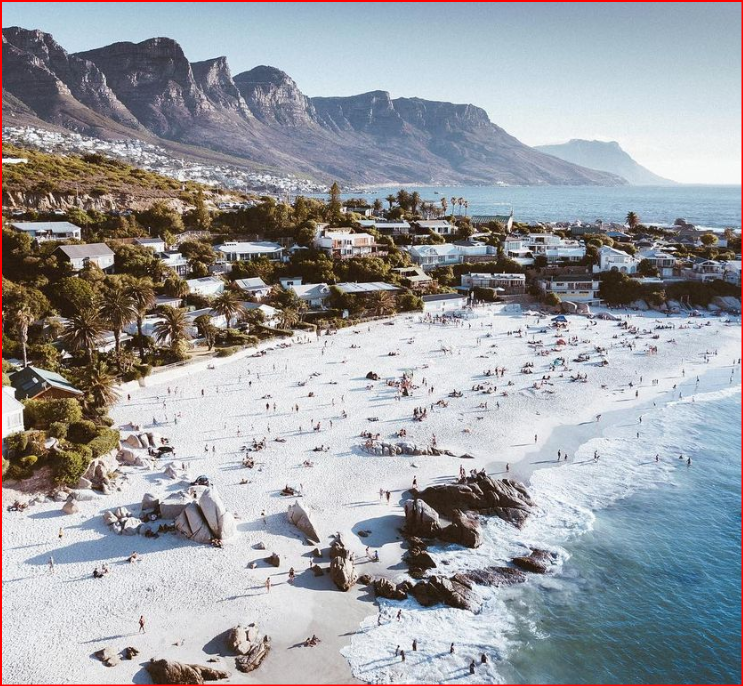 Clifton Fourth, is the biggest Clifton Beach with amenities including toilet Facilities, Cold Outdoor Showers, Umbrella and Chair Hire, roaming Snacks and Refreshments Vendors and a Restaurant, at the small Parking Area.
Clifton Fourth is also most popular of the four spots for Ocean dips due to the Calm Waters and Lifeguards. This Atlantic alcove teases with transparent turquoise waters, yachts floating on the postcard horizon and water temperatures cold enough, but after 'baking' in the sun this does, qualify a swim! The kids who happily fill their Beach buckets with sea sand for their sandcastle. Games of touch Rugby, Frisbee and Beach Bats, pop up in any towel flanked gaps.
'Sundowner Picnics' are splendid although be sure to feast on all your basket food, so that the load on the journey of a Hundred Stairs leading to and from this spectacular Shore is lighter on the way up. Park wherever you can find a spot on Victoria Road, parking is scarce between the Penthouse Residents and the Resident Beach Goers. An official blue flag rated beach for experience and safety a visit to Cape Town is unfulfilled without dusting bleached Clifton sand off Summer sandals.
Between Clifton and Llandudno beaches and Bordered by the spectacular, Twelve Apostles Mountain range and the glittering Atlantic Ocean, Camps Bay is one of Cape Town’s most breath-taking Suburbs. As well as being a popular Summer Attraction for Locals and Tourists who flock to the Beach. Camps Bay boasts Restaurants and Watering Holes aplenty, that Line the famous Sunset Strip for fun that goes, on long after dark.
It got its name “Die Baai van Von Kamptz” from Fredrick Ernst von Kamptz and the area remained mostly undeveloped throughout the 19th century. Lord Charles Somerset hunted there, using the Roundhouse as his lodge. Kloof Nek, the road which links Camps Bay to the City Bowl, was built in 1848, and in 1884 good old Thomas Bain, who built many roads in the Cape region, was commissioned to build one from Sea Point to Camps Bay. Of course, he didn’t literally build this one himself – that task fell to Convict Labour.
Completed in 1887 it was named Victoria to honour the Queen’s jubilee the following year. Along it, people cycled to Camps Bay which had become a popular Picnic Site, and it is now the Palm-lined Boulevard which sees hoards of Visitors thronging there to hang out, see and be seen – not that much has changed in the last century and a half. 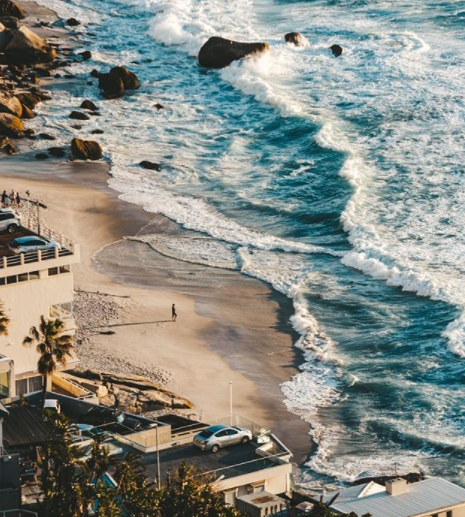 One of Clifton Beaches Image Source
Camps Bay is on two MyCiTi Bus Routes as well as the hop-on-hop-off City Sight Seeing Bus Routes. On the Beach you can rent Loungers and Umbrellas for a day of lazing in the Sun, get a Massage, or play Volleyball. There is often Street Entertainment, as the sun goes down.
Celebrities – who remain largely undisturbed by ultra-cool Capetonians – mix with Locals at Places along the Promenade with their Prime Beachfront Locations. National Geographic put Cape Town’s Beaches at number two in the World, and the set of Four, at Clifton. Named First to Fourth, they are separated by huge Granite Boulders. The Sand is Soft and White, the Water is Calm and Turquoise, and the fact that Clifton is sheltered from our notorious summer gale force South-Easter Winds, makes it unique.
Property in Clifton costs in the tens of Millions of rands but it wasn’t always like this; the Small Size of the Properties can be attributed to the Area being laid out by the City of Cape Town for Returning Soldiers, who had fought in World War I. The original Bungalows, now all but Replaced by new Structures, were Built from the Packing Cases that Conveyed Imported Motor Cars during the 20's and 30's.
There was Camps Bay Bowling Greens, is in front of a popular Restaurant on the Shoreline. These Bowling Greens have been CLOSED, on the 26 June 2018! This area is also a Landing Spot for the Paragliders, who launch themselves off Lion’s Head.
Geolocation
-33° 56' 15.207", 18° 22' 28.8719"
References
https://www.sa-venues.com/things-to-do/westerncape/chill-at-clifton-beaches/
http://www.capetown.travel/visitors/city-areas/atlantic-seaboard/camps-bay-clifton/
Further Reading
https://www.iol.co.za/capeargus/opinion/renaming-clifton-after-makhanda-doesnt-marginalise-coloured-people-18686820
https://www.facebook.com/SA.History/posts/patric-tariq-melletthe-world-commemorated-500-years-of-the-beginning-of-the-euro/2101571079952593/
http://www.bbc.com/travel/gallery/20181022-cape-towns-slave-ship-secret
https://www.pressreader.com/south-africa/weekend-argus-sunday-edition/20161016/281883002863603
https://www.capetownetc.com/news/200-year-old-ship-wreck-discovered-in-clifton/
https://www.facebook.com/groups/campsbaythenandnow/permalink/1987819241360523/
https://resource.capetown.gov.za/documentcentre/Documents/Procedures%2C%20guidelines%20and%20regulations/Beaches_LifeguardSchedule2020-21.pdf
