There is some mystery about how Noordhoek came by its name. While there is no doubt that it goes back to the time of the earliest white settlers some time after Jan van Riebeck arrived in the Cape in 1652, it is not certain whether the name simply refers to the Northern corner of the Fish Hoek/Kommetjie Valley, as common sense might suggest, or as some would have it, is a reference to the powerful Northern winds, which sweep off the South Atlantic in Winter, or even is a corruption of 'Norwegian Corner'; though why it should have been called this, is not clear! The most likely explanation is that the name refers to its Geographical position. Other suggestions give cause for romantic speculation! Archeological remains in middens and skeletons have revealed that the Valley has been inhabited for well over a thousand Years. The original inhabitants were Khoi nomads and Strandlopers who lived on, what the sea provided.
The most dramatic, though not the highest Mountain in the range that forms the Valley’s Northern boundary is Chapman’s Peak (547 meters). Noordhoek Peak is the highest point at 754 meters. Chapman’s Peak was named after John Chapman, a lieutenant in the Royal Navy who went ashore in 1607 to find water, in what was to be called Chapman’s Bay. Jan van Riebeck renamed it Houtbaai 40 Years later. The name was not lost however, as it was transferred to the next bay further South, where today the rocks on the right-hand corner are known as: 'Ratelklip'. In other words, the magnificent 8km Noordhoek Beach forms the landward perimeter of the Bay, ending at the rocks where the Wildevoël Vlei, enters the sea. The name; Ratelklip, is preserved in the very last Road leading off Beach Road just before the car Park. Chapman’s Bay is therefore one of the oldest place names, in South Africa.
The Noordhoek Valley is bounded in the North by Chapman’s Peak, Noordhoek Ridge and the sweep of Mountains which make up the Steenberg Plateau, towards Muizenberg, all of which form a magnificent Natural amphitheater! For many Years, Noordhoek was a fairly remote and inaccessible corner of the Southern Peninsula, until the Ou Kaapse Weg, was completed in 1960's. The only access for nearly 300 Years was via the main Road that follows the Railway Line, along the False Bay shore from Muizenberg via St James, Kalk Bay and Fish Hoek to Simon’s Town. It was not until 1923, that the scenic Chapman’s Peak Drive which links Hout Bay to Noordhoek was opened. The only way over the Mountains was little more than a track from Kalk Bay to Hout Bay. Consequently, Noordhoek was for many years cut off from the main Urban development of the Southern Peninsula. Since the Ou Kaapse Weg was completed, however, the Valley has not been spared the ravages of Urban development, which is in danger of destroying the very qualities that made Noordhoek attractive to start with! Namely, its rural Landscape and natural beauty, (which is now a mere 30 minutes from the heart of Cape Town.)
It all began when Noordhoek Farm was proclaimed in 1743, by governor-general Van Imhoff who granted the land to Christina Diemer who married Frederik Rossouw and inherited the Farm; 'Zwaanswyk', when he died. She also owned, 'Imhoff’s Gift' and extensive piece of Land, in Simon’s Town. The second owner was; Izak de Villiers who took possession of the Land, roughly 190 Years ago. In 1793, Jakob Malan built a House not far from the present gateway, to the Noordhoek Manor House. In 1821 much of present day Noordhoek was sold to Jacobus Hurter for less than £1000. Other settlers of that period were Alexander and Joseph Hare, Robert Scott, William Fairlie and Isaac de Villiers. The de Villiers's family has been associated with the Valley for many Years. A descendant of the first Huguenots arrived from France in 1687, settled in the Noordhoek Valley in 1881. During this time of sailing ships, Noordhoek was well known for many Years for providing the 'men-of-war', in Simon’s Town with fresh vegetables.
More recently, Sir Drummond Chaplin, a protégé of Cecil John Rhodes and MP for the South Peninsula seat, for the South African Party, bought 330 acres of Forest on the Mountain side. This Land was destined to become much of the present day De Goede Hoop Estate, which took its name from Christina Rousseau’s original Farm. Sir Drummond’s Manor House was designed by one of South Africa’s most famous Architects, Sir Herbert Baker. The foundation stone was laid by Prince Arthur, of Connaught.
The power of Community is palpable in Noordhoek, as a Community collaboration project has come to fruition. Earth & Co along with Project Noordhoek unveiled a new beachside bench built entirely out of EcoBricks! (The Noordhoek Community has always had a deep minded concern for the Environment and their Natural surroundings). The Community has created a bench on the Beachfront which according to Earth & Co.’s Facebook page, was crafted from 800 EcoBricks, amounting to 400 kgs of plastic and non-recyclable waste! The EcoBricks were collected from and contributed by the Noordhoek community. 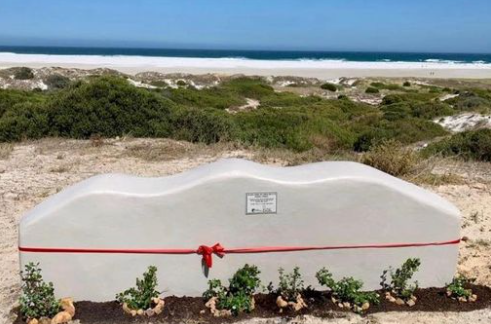