The Springbok Legion (SL) was a leading organisation formed in 1941 to fight for the rights of soldiers during World War II and in the post-war period. Over time the organisation became radicalised by members of the Communist Party of South Africa (CPSA) who joined it and served in its upper and lower structures. This resulted in the fracturing and decline of the organisation particularly after the war as members became disenchanted with its increasingly militant leftist rhetoric.  While the SL accepted black people into its membership, it remained largely a White organisation in the majority of its membership and leadership. When the organisation eventually broke up and hundreds of white members left, some members remained in the SL and eventually joined the struggle against apartheid through the Congress Movement.

According to Neil Roos, “Springbok was used to fondly describe the roughly 200 000 white South African men who volunteered to serve in the Union Defence Force (UDF) during the Second World War.” (Neil Roos, Ordinary Springboks, p.1). Forced by deteriorating material conditions, resulting from economic depression in the 1930s, poor white men enlisted in numbers as volunteers to join the UDF.  An estimated 110,000 white women and 80,000 black men also volunteered. However, black men were not permitted to carry weapons or arms.

After the outbreak of the war, politicians began using the name Springbok to describe white volunteers, although the usage of the name predates its application to the UDF volunteers. In fact, it was in 1903 that the name was first adopted when the springbok was used as an emblem of the South African Rugby Board. At the outbreak of the war the army sought to unite black and white servicemen by embarking educational programs on communism and socialism, trade unionism, ‘Native, Indian and Coloured Affairs.’ This was aimed at attempting to educate white volunteers on being tolerant and developing a more liberal mind on issues of race. Fred Carneson later noted “the Legion became a vehicle in the South African Army for a lot of progressive thinking on the race issue as well amongst white South African soldiers.” (As quoted in Lazerson, Whites in the Struggle Against Apartheid, p.55).

In December 1941 the Springbok Legion (SL) was formed by members of three organisations; the Soldiers Interest Committee the Ninth Recce Battalion of the South Africa Tank Corps of Kaffairkraal and the Union of Soldiers founded by Fred Carneson. Shortly after its formation, the SL launched the Soldiers’ Manifesto which laid out a number of economic demands for former service men, and in addition urged unity and cooperation among different racial groups. Thus the SL initially functioned as a “soldiers trade union, a non discriminatory organisation with a mixed race membership, which aimed to carry over into peace time, the cooperation which existed between races.” In essence the SL sought to develop a movement that would cater for soldiers after their return from the war.

Branches of the SL were established in Johannesburg, Cape Town and Durban. Membership to the SL was open to all races and to women, although few women actually joined. The Guardian, a left wing newspaper, reported that Africans, Indians and Coloureds had applied to join its ranks. For instance, Peter Kaya Selepe, an organiser of the African National Congress  (ANC) in Orlando, who had served in WWII was member of the SL. In October 1944, the SL noted that 98 new black members had joined the organisation.However, it had a limited appeal to these constituencies as it did not seem to fully address their immediate concerns.

It was the inclusion of all racial groups which set the SL apart from other organisations such as the Memorable Order of Tin Hats (MOTH) and British Empire Service League (BESL), which constituted of those who had served in World War I. However, including black people in its membership earned it criticism from those who were opposed to its non-racial policy and conversely, praise from those who viewed it as a progressive organisation. 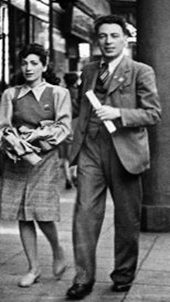 Although the SL projected itself as a non racial organisation, it was run by white men. By 1945, it had become clear that the organisation did not draw in as many numbers of former black soldiers as it was expected.

After 1944, Jack Hodgson and Jock Isakowitz both members of the CPSA played a leading role in the SL. Later the publication came to include members of the Congress Alliance in its editorial board amongst who were Brian Bunting, Lionel Bernstein and Ruth First.

At SL’s first national Conference in 1942, several members of the CPSA were elected to leadership positions. For instance, Jock Isacowitz was elected as National Chairman, Jack Hodgson as National Secretary while John O’ Meara and Joe Podbrey served on the SL’s executive committee. Other CPSA members, who served on the lower structures of the SL, include Roley Arnestein and Roy du Preez. With the formation of the Homefront League (HFL), a subsidiary body of the SL to oversee its activities, more CPSA members, Ruth First, Vernon Berrange, Solly Sachs and Joe Slovo among others became involved, raising alarm even among soldiers. 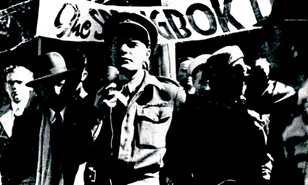 Members of the Springbok Legion

By 1944, the membership of the SL increased had increased to 60 000. The ability of the Legion to organise large numbers of white people attracted the attention of the CPSA.The CPSA hoped to use the SL as a vehicle of mobilising the white working class and reorganising white political culture. Subsequent to the invasion of the Soviet Union by Germany, several white communists joined the UDF, thus also boosting membership of the SL.

Towards the end of the war, radical members of the SL used Fighting Talk to criticise the racial and class make of South African socio political order. They called for social justice and advanced arguments about an egalitarian society. This spooked a number of White members whose premise of the post-war life was based on the preservation privileges for white people. As a result from the mid 1940s they began to leave the SL.

When the National Party (NP) seized power in 1948, its policy of Apartheid challenged the SL which had black members in its membership. As the NP-led government began putting in place the Suppression of Communism Bill, the SL which had communist members in its ranks among other organisations launched fierce opposition. The SL vigorously campaigned and opposed newly implemented apartheid regulations which separated people on the basis of race. For instance, when segregation on the trains was proposed, the SL condemned the government and stated that this was the “”¦first measure of a policy designed to remove all rights from Non Europeans. It will culminate in disenfranchisement”¦It was contrary to all morality in direct conflict with the fundamentals of civil liberty.”

Decline of the Springbok Legion

By 1946, the SL was in decline as its active membership was reduced to an estimated 100 active Legionnaires. Around this period, the need for SL which was formed, that is to address demands of most white soldiers, had been met. Lazerson points out that the same could not be said for black ex-servicemen. Thus, “By 1947 the Legion’s initial purpose ceased to exist.”

The influence of the communists in the SL resulted in the resignation of some members of the SL albeit in small numbers. As the legion’s radical took more leftist position in opposition to the government defections increased. Towards the end of the war, “”¦radicals were beginning to dominate the Legion, and their idea of a unified, non-racial South African working class was anathema to most white ex-servicemen, whose hopes for the post-war world were premised on a range of racialised assumptions.” This was a major contributing factor to the decline of the SL.

When the Suppression of Communism Act was passed, several members of the SL began leaving the organisation. Lazerson notes,

“The combined effect of the Act, and the broadening and deepening of the Legion’s commitment to ‘democratic’ and, to some extent internationalist politics was particularly alienating to many Legion members. This period rang a death knell for the Legion as it had been.” (Lazerson, Whites in the Struggle Against Apartheid, p. 61)

Disagreements within the SL resulted in the formation of the Torch Commando (TC) which organised rallies, torch light processions and motorcades particularly in 1951. The TC rallied behind the United Party (UP) in the 1953 elections, in an attempt to have the party elected. When the NP was re-elected, a significant number of white Legion members accepted the NP’s victory and began supporting white laws and white constitutionalism. After the victory of the NP in the polls the Torch Commando was dissolved. Unlike the SL, the Torch Commando refused to cooperate with the CPSA. For instance, when the CPSA and the the Congress Alliance formed the Franchise Action Committee (FRAC) to organise rallies in Cape, the TC refused to work together with it.

A number of members who remained in the SL joined the struggle against apartheid and became part of the Congress Movement. As Roos notes, “After the war the radical white activists who remained in the Legion increasingly threw their weight behind the Congress movement.” Consequently, they became involved in the struggle against white minority rule. Late in 1952, the security police raided the headquarters of the SL office in Johannesburg and seized documents including minutes of meetings. In addition, after the apartheid government seized power, a number of SL members were forced to flee the country to exile as some were members of the banned SACP.

A History of the Springbok Legion