‘Not only is the Egyptian climate peculiar to that country, and the Nile different in the way it behaves from rivers elsewhere, but the manners and customs of the Egyptians themselves seem to be the opposite of the typical practices of mankind’. - Herodotus.

When Herodotus, the ancient Greek historian, wrote these words, Egyptian civilization had been going successfully for thousands of years without foreign interference. These unusual people, thanks to the uniquely protective Nile River Valley, had the opportunity to develop differently from Europe and the East. Long periods of isolated growth without foreign invasion occurred because Egypt had natural borders that were impossible, or very difficult to cross.

So immense is the significance of the Nile River to the development of Egyptian civilization, that we cannot separate the history of Egypt from its geography and other natural aspects. The Nile was very important as a communication and trade route across a vast and harsh land. Also, its annual flooding renewed farmlands that would otherwise be arid desert.

Since before written history, people have built their homes in towns and cities made along the banks of the Nile. But it wasn't always this way. The earliest inhabitants of this region were Stone-Age hunter-gatherers who roamed an immense area rich in wildlife, which is now a desert. With radical changes in climate, these people gradually replaced their nomadic culture with the settled life of agriculturalists.

‘We are content with our Black land ”¦ the heartland is with us’. - A Pharoah's inscription on a wall in the Temple of Karnak in Thebes, referring to Egyptian appreciation of the fertile soil.

The Sahara desert, the Nile River and the abundance of rock greatly influenced where and how the ancient Egyptians settled and built their civilization. These factors combined: landforms, climate and water, are looked at in detail. 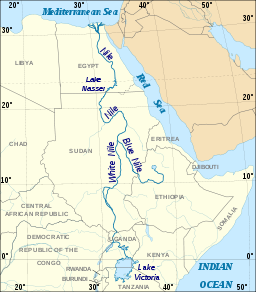 Alluvial soil is rich earth deposited by floods, usually over riverbanks. The Nile flooded annually in summer this way, renewing the fertility of the soil and the Egyptians' ability to grow crops and feed themselves over and over again. Their gratitude for this is reflected in their religion. Source: www.wikipedia.com

Ancient Greeks said that Egypt was the gift of the Nile. The Ancient Egyptians settled themselves on the narrow strip of alluvial soil along both banks of the Nile. This came about for two reasons: excellent agricultural soil in the thin fertile zone next to the river. Beyond this was barren land and rugged cliffs, followed by arid desert. The Nile is the biggest river in Africa, and is the result of the joining of three rivers from Sudan, Uganda and Ethiopia. It starts in south (Upper) Egypt and ends at the country's northern border with the Mediterranean Sea (Lower Egypt). This separation of the country into two regions stems from ancient times. It also reflects the distinctly different higher ground and narrower river valleys in the south, from the flat flood plains of the delta in the north by the sea.

In its lower (northern) part, the Nile River splits itself many times and spills into the Mediterranean Sea across a huge delta plain. To the east another natural boundary, The Red Sea, extends roughly parallel to the Nile. Because of these two seas, the Egyptians were the only people of the ancient world to be able to control both western and eastern foreign trade.

Note to educators: This section will be developed to include the growth of the settlement around the Nile river in Egypt.

For further reading on the Nile, go to:

Gifts of the Nile - Ancient Egypt for Kids

The Nile river and its influence on settlement
Grade 5 - Term 3: An ancient African society: Egypt