The first election that created the modern South African state, held in accordance with the provisions of the Union of South Africa Act of 1909, set the scene for a political system that lasted for over eighty years. In the dispensation that merged the two independent Afrikaner Republics of the Orange Free State and the Transvaal, and two British colonies of Natal and the Cape Province, the constitution explicitly excluded Blacks from participating in mainstream political activity. It was only Blacks and Coloureds in the Cape Province that were allowed an indirect representation in the country’s representative bodies.

Black opposition to this political dispensation began with the first election of 1910, led by the South African Native National Convention (SANNC) renamed the African National  Congress (A.N.C.) in 1923. Appeals by the SANNC to the British government were ignored and a new Union government was established.

In this compromise arrangement between rival Afrikaner interests still bitter about the outcome of the Anglo Boer War of the previous decade, and what was perceived as British “Imperial” interests, the election was won by the South African Party (SAP) led by Louis Botha. Botha became the first Prime Minister, an act considered be the pacification of the Afrikaner. The main opposition party, the Unionist Party, was considered to be promoting British “imperial” interests. The third party, the South African Labour Party represented mainly white workers associated with the labour movement. The outcome of the elections showed a desire for striking a compromise arrangement that excluded Blacks from participating in the political process. 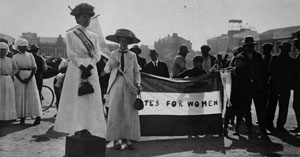 The Suffragettes wanted the right for women to vote. Source: Museum Africa, Johannesburg.

The outbreak of World War I led to tensions between the dominant interests, the Afrikaner’s search for security from Blacks and English Imperial interests united by the desire to see increased English influence in South Africa. This led to the emergence of the National Party, styling itself the custodians of Afrikaner interests. It was only ten years later, in the elections of 1923 that this party, in a pact with the Labour Party representing white workers, formed a government. The Pact Government did not survive the challenges thrown up by the Great Depression of 1929, giving way to a Coalition Government of the SAP and the National Party. This coalition also had a brief duration, being put to a test by the outbreak of World War II.

The results of the 1929 elections reflect the shift in voter preference, with an increasing number voting for the Afrikaner party, the National Party led by JMB Hetzog:

This election has yet another significance barely referred to in most studies of the period. It was the last election in which white women were not allowed to vote. In 1930 white women were entered into the voters’ roll and allowed to vote in the following election, which was held in 1933. The Women's Enfranchisement Association of the Union (WEAU), was the main pressure group that lobbied for the extension of the franchise to white women. In some cases these groups demanded the extension of the franchise to all women, thereby linking white women’s concerns with those of women of other races.

It appears that parties that were most likely to garner support from white women were keen on the franchise being extended to them. It is possible that it was parties with a strong Afrikaner support base, the National Party in particular, that may have promoted this measure. For more on women’s campaigns in South Africa read "Women and elections in South Africa".

The Coalition Government was also characterized by a growing confidence in the Afrikaner parties. There was a new initiative to attack the Cape franchise and bring the province in line with the rest of South Africa. In 1936 Blacks in the Cape were removed from the common voters’ roll and provision was made for their participation in the Native Representative Council (NRC) under the Representation of Natives Act of 1936. Consequently, “the elections of 1937, 1942 and 1948 were the only elections ever held in South Africa before 1994 on a national level in which blacks indirectly took part”. (Lodge, T(ed)(1986) Resistance and Ideology in Settler Societies) p144. (own emphasis)

World War II brought to the fore sharp differences over allegiance to Britain leading to a fracture in white South African politics. The situation was worsened by the heightened militancy of Black people, especially the black labour movement, resulting from growing levels of urbanisation. These wartime developments combined to bring about a shift in white politics. The middle-of-the-road or compromise arrangement between English and Afrikaner interests gave way to right wing dominance of the political landscape. This was considered the most effective response to challenges thrown up by increasing levels of black militancy. The first post WWII election, the election of 1948, reflected this development. 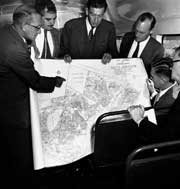 The election in 1948 was a contest between white political parties over the most effective strategies of containing Black resistance to white rule and keeping them away from the urban areas. The NP promised white voters that its government would restrict Blacks to the Homelands while systematically marginalizing those in the urban areas, denying them permanent residential rights in the cities. This also meant that Blacks could only exercise political rights in the Homelands.

The NP government introduced legislation that provided for the establishment of Homelands for Blacks. The Bantu Authorities Act of 1951 provided for the establishment of eight homelands where Blacks were ‘allowed political rights’. In 1959 the Promotion of Bantu Self Government Act was passed which provided for ultimate independence from South Africa of the eight designated homelands. And the first step towards the realization of this objective was the passing of the Transkei Constitution Act of 1963 which provided for elections being held in that homeland.

Following the elections in 1963, Kaizer Matanzima was elected Chief Minister and a “Bunga” or Parliament was established for the Homeland. The ill fated homeland, along with all the others that followed, was dissolved shortly before the democratic elections in 1994 and incorporated into the post Apartheid South African state.

The outcome of the 1948 elections was interpreted by Verwoerd and other leading Afrikaner politicians as signaling an acceptance of the Apartheid policy by the majority of white people. But it was only after the NP was returned to power in 1953 that it introduced some of the most draconian measures aimed at containing Black resistance. And with every successive election thereafter, British “imperial” influence became less of a factor in South African politics. The adoption of Republican status in 1961 merely made formal what had already become a reality-that British influence had become irrelevant in South African politics.

The last Apartheid election of major significance was held in 1983. The election was a referendum about a new constitution providing for the creation of two additional houses of parliament for Coloureds and Indians as well as introducing an Executive President in place of a Prime Minister. This was a radical departure from the Westminster system South Africa had inherited from Britain. The outcome of this election, which reflected the white electorate’s acceptance of the NP government’s constitutional reforms, marked the beginning of the end of apartheid and white hegemony. The next election in 1988 merely laid the foundation for meaningful negotiations and reform that led to the introduction of a democratic alternative for South Africa in 1994.

History of elections in South Africa