The town of Marikana, formerly known as and still sometimes referred to as Rooikoppies (red hills), is based in Rustenburg, in the North West province of South Africa. The town was established in 1870 and later expanded into seven White owned farms by the early 1900s - farming tobacco and maize amongst other crops.

In the 1970s, platinum mining was introduced and it rapidly grew to become the main industry in the region. Following the introduction of mining activities, the formal and informal population of Marikana experienced an explosion in numbers as mining required a far greater labour force than crop farming. Men migrated from various regions in Southern Africa, predominantly the Eastern Cape, Lesotho, Zimbabwe and Mozambique, in search of employment at the mine.

Marikana now has a population of over 30,000 people and is divided into two sections administered by different municipalities: the Rustenburg local municipality, and the Madibeng local municipality, both falling within the greater Bojanala Platinum district, one of the four districts of the North West province.

The women in Marikana have also migrated from various regions in Southern Africa; some of the women married to the miners have followed them to Marikana, while others have come to Marikana in search of spouses or work, and some have moved to Marikana from the nearby informal settlement, Wonderkop, or formed relationships with the men in Marikana while still living in Wonderkop. Most of these relationships are out of wedlock for a number of reasons, including that many of the men have wives where they come from. In some cases women have remained 'mistresses' for decades, raising a family and sustaining a household so that the men can maintain their long work hours.

Asanda Benya writes that in order for the UK-based platinum mining company, Lonmin plc, to sustain “a mining economy that is still fundamentally premised on the sale of cheap labour power” it must rely on the invisible labour reproduced on a daily basis by many women, and that the daily work of the women produces the “material and immaterial conditions of mineworkers” that enables the miners to be productive despite low wages [101] .

Employment opportunities in Marikana are low for women and the few women that get work in the mines are at a high risk to experience sexual or other types of violence towards them. According to a 2015 survey run in the municipality [102] .The overwhelming majority of women in Marikana rely on men for economic sustainability. The low living wage of the miners exacerbates the already poor living conditions the women have to sustain a household in. Poor living conditions such as houses or dwellings existing without electricity, running water or plumbing are pervasive in Marikana. Many women are forced to walk far distances everyday to fetch water from a communal tap - a tap that sometimes does not work or just drips. Women often have to relieve themselves in bushes as there are no running toilets. These are among some of the poor living conditions many people in Marikana are living with. 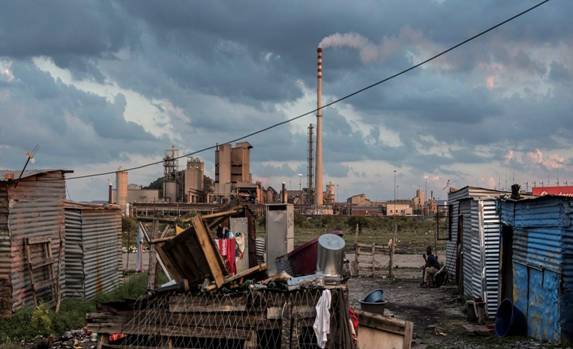 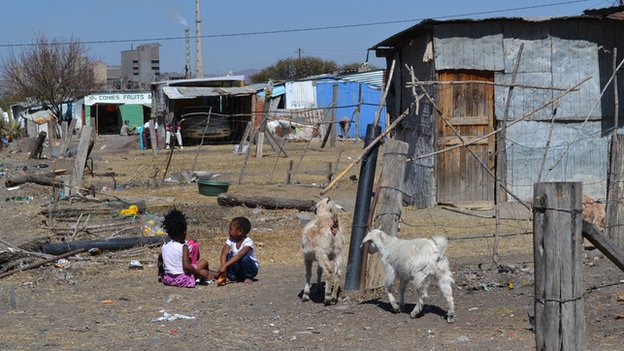 When the miners began their strike in August 2012, in protest of poor living conditions and low wages, the women of Marikana supported them by boosting and maintaining morale, taking on additional income-generating activities, utilising community saving schemes and amiable relationships with tuck shop owners, who gave families food on credit during strike actions.

Lonmin is reported [103] to have been earning about $6 million a day in 2012 preceding the strike. During the strike Lonmin management refused to meet with the striking miners. 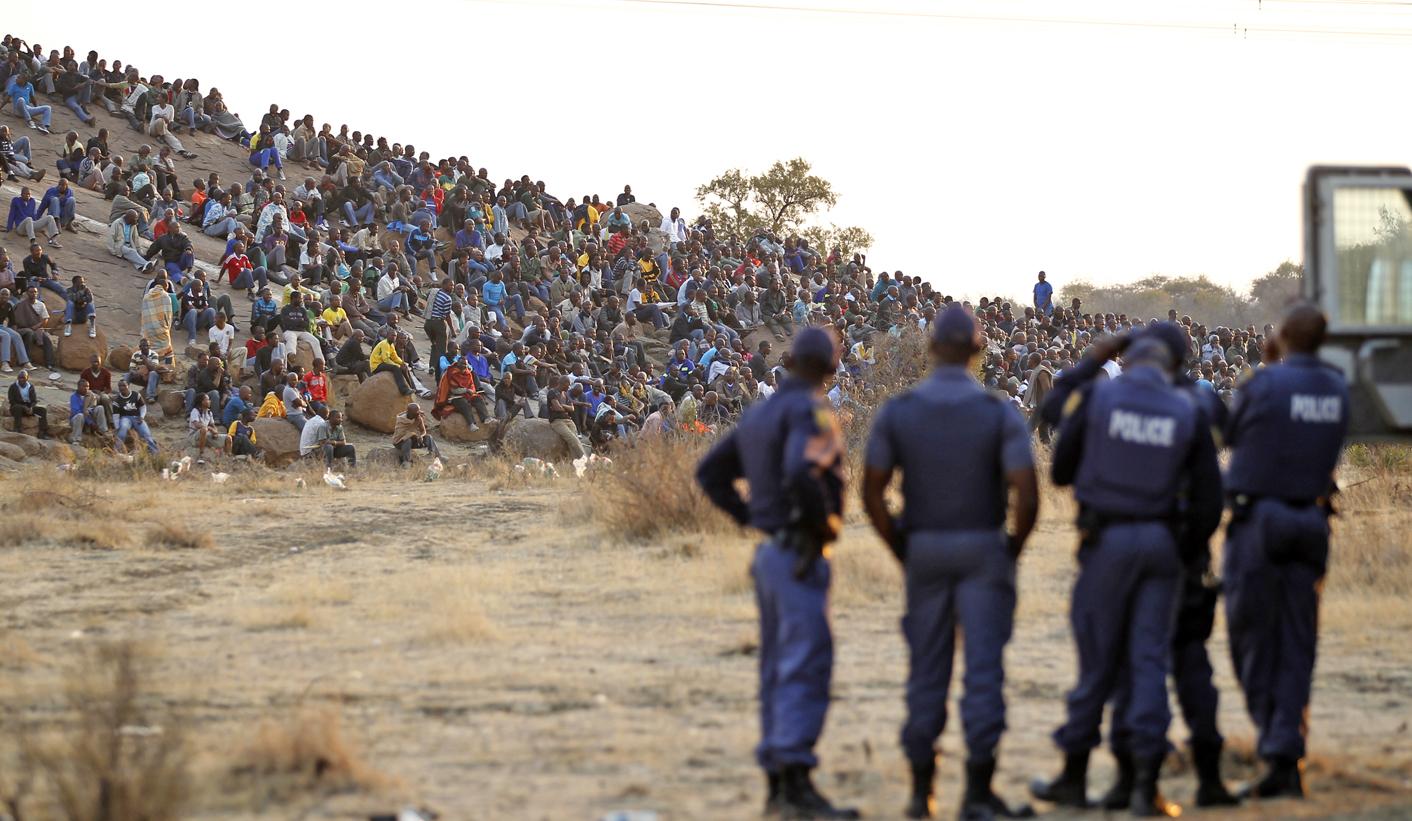 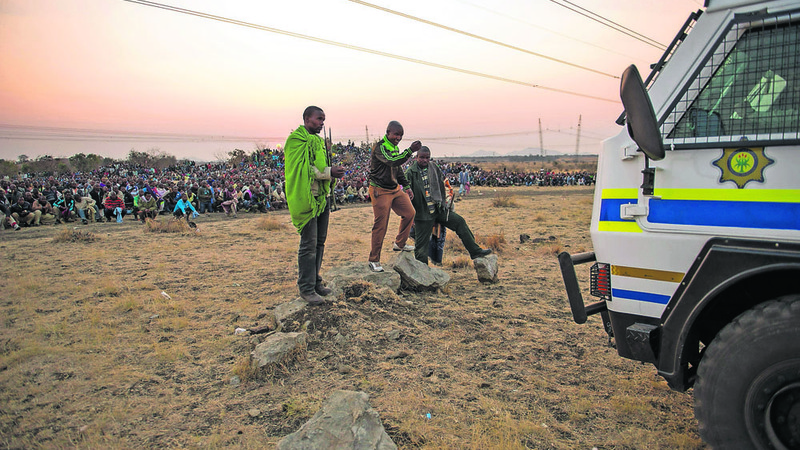 The next day, 17 August 2012, women gathered next to the site of the massacre in protest against police brutality, mine exploitation and a lack of official information that left them agonisingly in the dark. The women were confronted by the police and forcefully removed from the area. Women of Marikana also protested outside the court, demanding the release of the arrested protesting miners. 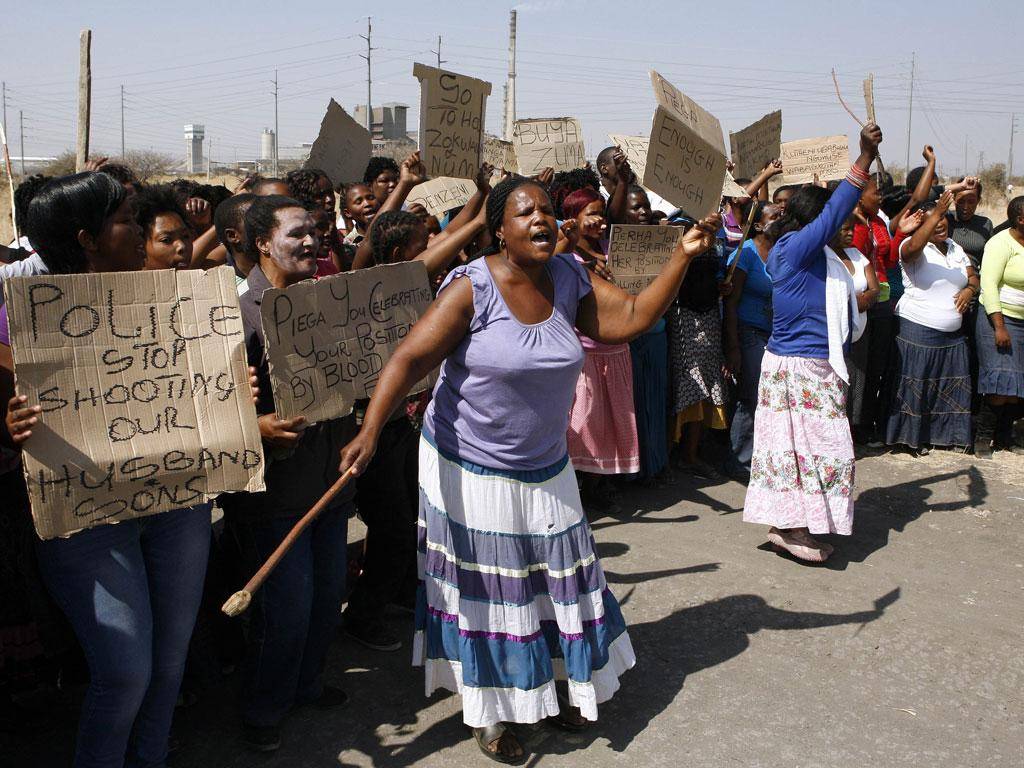 Women of Marikana, many of whom were widowed the day prior, protest against the police, the government and the mine owners of Lonmin on 17 August 2012. Credit: Independent Image source 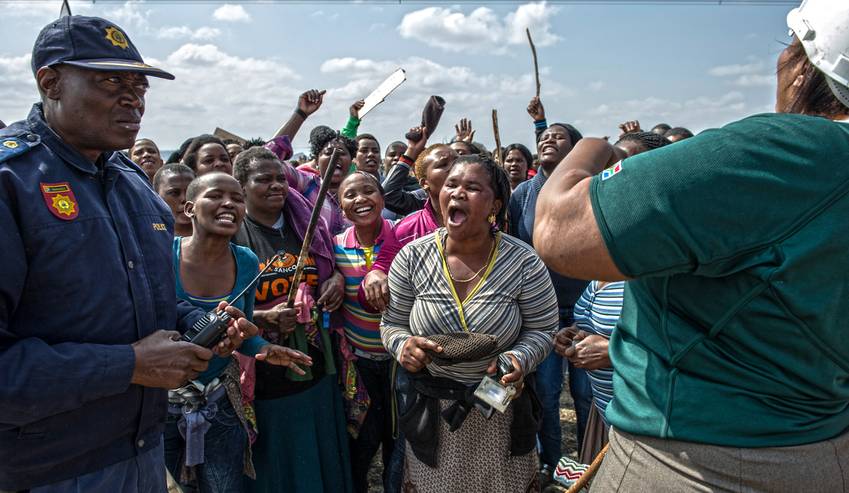 Women from Nkaneng shantytown in Marikana, led by ANC PR counsellor Paulina Masuhlo (pictured centre right), gathered on 18 August 2012, to have a meeting to discuss the deaths of 34 of their miners two days previously. Masuhlo was killed a month on 20 September 2012 by rubber bullets allegedly shot by the police. Credit: Greg Marinovich Image source

After the mass killing; Lonmin did not compensate affected families in Marikana. The mining company instead offered the mining jobs of the affected miners to their partners. Many of the women were forced to work in the mines to replace their husbands and earn an income, further fragmenting their households.

Amidst major public and media scrutiny, President Jacob Zuma and the South African government recommended a full investigation into the killings that occurred at Marikana, to take place under the Director of Public Prosecutions; the investigation is known as the Farlam or Marikana Commission of Inquiry. The findings of which were revealed in June 2015, ascertained the criminal liability of members of the South African Police Service who were involved in the events at Marikana, and absolved key political figures involved in the event, including Nathi Mthethwa (Minister of Police), Susan Shabangu (former Minister of Mining) and Cyril Ramaphosa (who was implicated in a Lonmin tax avoidance scandal and implicated in the socio-economic failure of the World Bank loan not reaching workers and their families in Marikana), but who has since been elected President of the African National Congress on 17 December 2017. The inquiry also recommended further inquiries on Ria Phinyega who was the National Police Commissioner and the Northwest Police Commissioner, Zukiswa Mbombo, regarding their fitness to run the office.

Despite a court recommendation that the president gives 48 hours notice before revealing the findings of the Commission of Inquiry so that families and survivors of the Marikana killings could prepare themselves, Zuma gave just a few hours warning before the findings of the commission were revealed - refusing the right of many of the victim's families’ time to prepare to watch the commission's findings.

At the end of 2012, a non-profit organisation was formed by women in Marikana, called Sikhala Sonke, meaning ‘we cry together’, a group commonly referred to by the media as the ‘Women of Marikana’. The organisation formed in direct response to the killing of Paulina Masuhlo, an ANC councillor and protester, on 15 September 2012. Mashulo was amongst other protesting women when she was allegedly shot by police and later died in hospital. 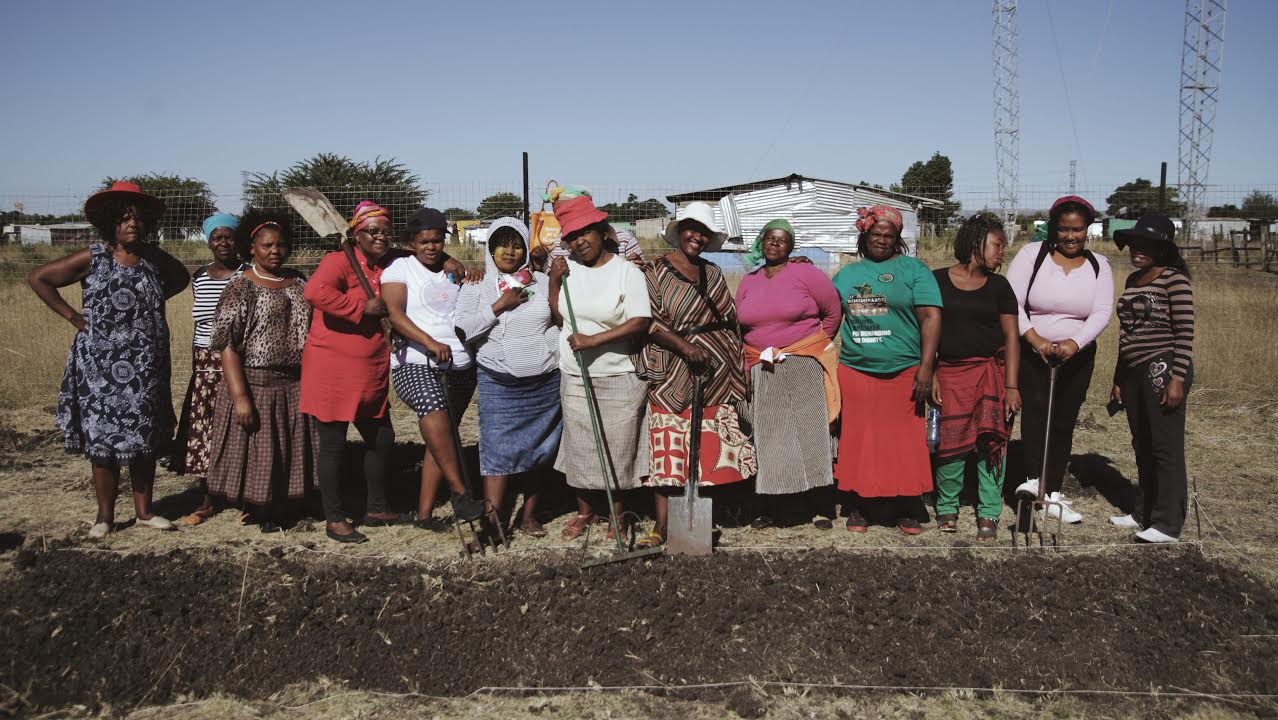 Sikhala Sonke Women’s Organisation, pose by a community garden they created. Sikhala Sonke is an organised front against state and corporate exploitation as well as a community project. Image source

The organisation was also formed in solidarity with those who died in the August strikes, and is geared towards demanding action from Lonmin. The organisation gathered in hospitals, funerals, prisons and courts. On Human Rights day, 21 March 2014, Sikhala Sonke gathered at Lonmin and handed over a memorandum to the mine’s management.

The memorandum was in part addressing a $50million investment by the finance arm of the World Bank, the International Finance Corporation (IFC ) into Lonmin; $15million of which was specifically earmarked to improve the living conditions of communities living around the mine. Lonmin's then CEO, Brad Mills, said that with the support of the IFC funds, Lonmin would ensure those living near the mine were made "comfortably middle class" and would be assured of an economic life long after the platinum has been depleted.The funding was to help improve pollution, sanitation, access to water, housing, education, and women's access to employment. An IFC advisory board was established with the stated intention of ensuring these things happened.

However, sanitation and other living conditions in Marikana remain dire. Lonmin Plc, had also committed to constructing over 5000 houses for workers by 2011 under its 2006 Social and Labour Plan (SLP). To date, August 2017, only 3 houses have been built.

On 12 August 2014, Sikhala Sonke invited media and public to bear witness to testimonies on their lives and hardships in Marikana, and what they would like to change about their living conditions. They also took attendees on a site inspection of Wonderkop in Marikana.

Invitees included Ministers and Parliamentarians, the Office of the Premier in the North-West province, representatives of Chapter Nine bodies, prominent civil society leaders and cultural workers. 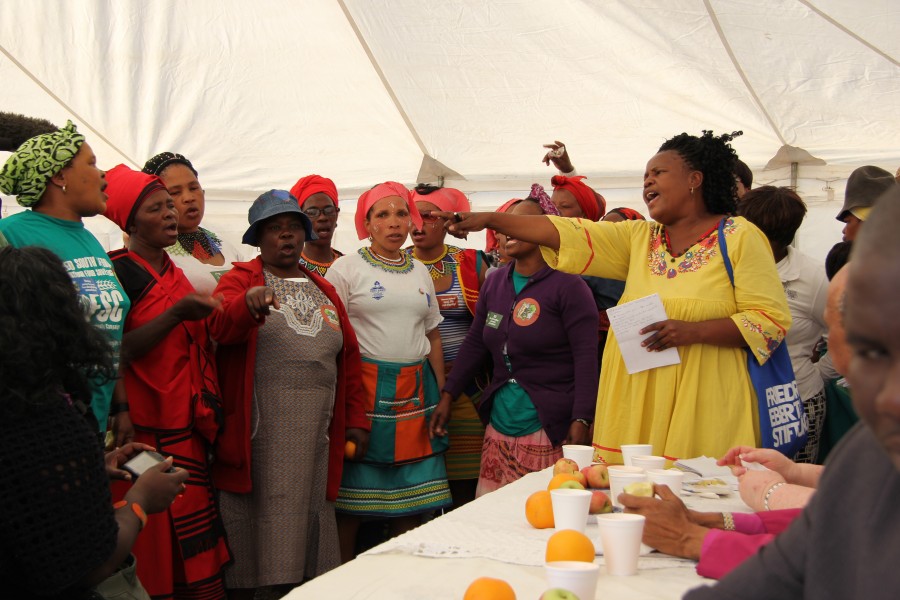 Sikhala Sonke members provide vocal testimonies about the hardships they have faced to those in attendence. Credit: Gillian Schutte, Media for Justice Image source 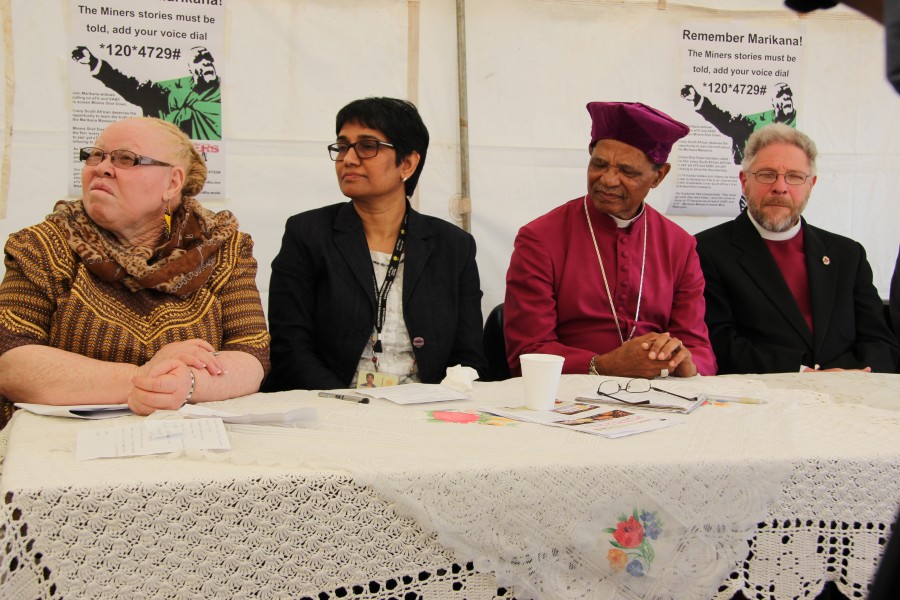 In 2015, Sikhala Sonke lodged a complaint against IFC.

Sikhala Sonke participated in resolution talks with Lonmin in 2016 but pulled out as they found there was little room for negotiation.

Filmmaker, Aliki Saragas documented the community of Marikana's struggle for justice in 2016, with a focus on the perspective of the women. The documentary is called Strike a Rock and was released in 2017. 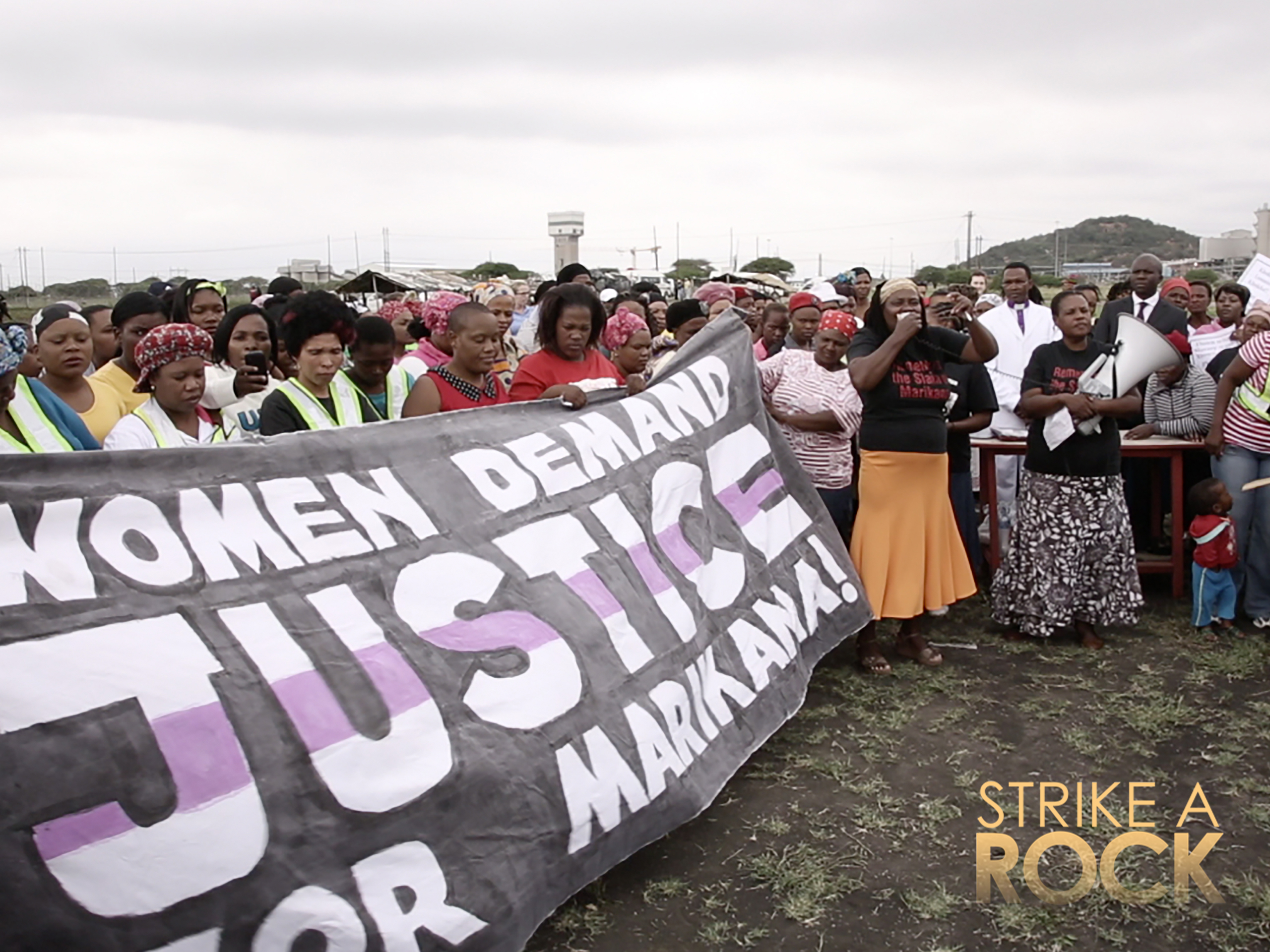