Hendrik ‘Hennie’ van Wyk was born in Vredendal, Cape Province (now Western Cape) on 14th July 1936. His childhood witnessed the final days of colonial rule and the transition to the apartheid regime in 1948, and in 1950, he and his family were forced to register as Coloured, according to the Population Registration Act.

In 1951, at the age of fourteen, he moved to Cape Town to continue his education at Wellesley Training College, as there had been no high schools in his home area for Coloured individuals. He remained in this school until Grade Ten, when he left for economic reasons in 1955. His Grade Ten exams were the last integrated examinations in the apartheid period – after that, examinations and curriculums in South Africa were segregated by race. During this period in Cape Town, Van Wyk boarded with a Mr and Mrs Lewin, a highly political couple under whose guidance he was first exposed to a political education, and as a teenager, he delivered African National Congress (ANC) newspapers, The New Age  and The Torch.

After leaving education in 1955, Van Wyk began to take on menial jobs in order to keep money coming in. From 1957-58, he worked with a travelling salesman, journeying between Durban, Johannesburg and Cape Town. It was during this period, which saw the introduction of the Group Areas Act (1958) that he experienced apartheid discrimination at its worst. While travelling in KwaZulu Natal (then known as Natal), he recounts being unable to walk at night in White suburbs, and having to sleep and eat in staff quarters of hotels. One day, he missed an assigned mealtime at a hotel restaurant, where staff refused to serve him even a sandwich or tea because of his racial classification.  Experiences like this, he claims, left him with a feeling that he had no choice but to become politically active.

In 1960, Van Wyk married Joanna M. Jacobs. The couple had seven children: five daughters and two sons, and now have fifteen grandchildren and two great-grandchildren. When his children were born, Van Wyk promised to educate all of them as far as possible, and would later encourage their involvement in student politics. 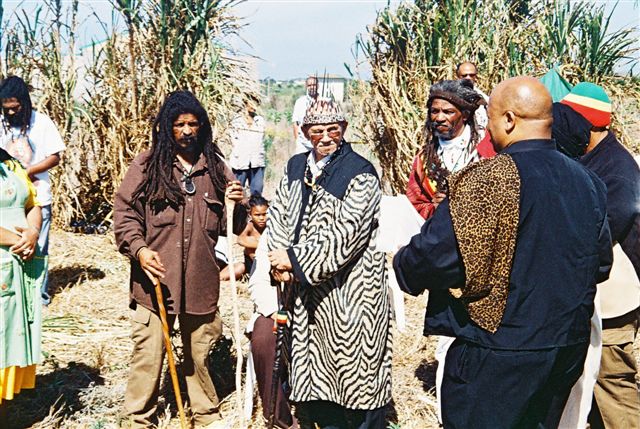 In 1961, Van Wyk joined the City of Cape Town Municipality, for whom he worked for 34 years. Through this, he became an active member of the Cape Town Municipal Workers’ Association (CTMWA), his first involvement with any trade union movement. His political consciousness and sense of injustice in the apartheid regime was heightened from 1968, when his promotion to the role of a meter reader meant that he regularly began to enter White homes. This exposed to him the differences in living standards in White and non-White communities, and to a deep sense of humiliation, although he was unable to confront these issues directly at the time. His political consciousness was further heightened in the wake of the Soweto Uprising in 1976, which sparked a new wave of anti-apartheid resistance from the Coloured community.

Van Wyk’s involvement with trade unions and community organisations in the liberation struggle grew in the early 1980s. He joined the Steenberg Housing Action Committee in 1980, affiliated with the Cape Areas Housing Action Committee (Cahac), and was elected to its steering committee in 1985.  That year, Van Wyk was also active in the newly established Congress of South African Trade Unions (Cosatu), due to his involvement in the CTMWA. At this point, trade unions were becoming increasingly militant and politicised as part of the anti-apartheid movement.

During this period, Van Wyk was also instrumental in the formation of a support group to help his daughters and their contemporaries through struggles and discrimination that they were facing at school. The students’ involvement in student uprisings and liberation movements caused them to face harassment at school, and when his youngest daughter refused to write her final exams in protest, she was victimised by her teachers. Another of his daughters had also been beaten up in a 1985 march against the state in which she participated with the newly established student council.

Due to this increasing involvement with the liberation struggle, Van Wyk was detained by the security branch of the police on 15th June 1986 for political involvement threatening the state. At 4.30am that morning, his house was surrounded by heavily armed police. He was initially detained at a police station, Wynberg Charge Office, where he was pressured – and where he refused – to make a statement against others involved in the anti-apartheid struggle. He was then transferred to Victor Verster Prison where he was detained for 90 days. He was one of over 50,000 individuals detained across South Africa for political participation in this period.

Inside the prison, he explained, criminal and political prisoners were separated, creating a very political environment in which he and his ‘comrades’ formed their own structures and systems. They fought for better conditions in the prison, for example, demanding better mattresses and blankets, and started a hunger strike when coloured and black prisoners were given different food. Van Wyk refers to his time in prison as a learning process that was hugely important in his political education, describing it as an equivalent of politicisation through a university education or student activism.

This was Van Wyk’s first experience of detention, one which he describes as traumatic. He was temporarily put in isolation, and for the first eight days, he was unable to see either his family or a lawyer. He was later charged with the possession of dangerous weapons, specifically a sharpened spoon, but refused to give a statement without legal representation. On 28th August 1986, he was ordered to pack up his goods and told that he would be going home. Instead, he was transported to Steenberg police station, only 500 metres from his home, where he was held in a solitary cell until 9th September, when he was released without charge. His family and friends came to collect him, since he was afraid to walk home alone.

During the period of his detention, Van Wyk was never physically harmed, although he describes some of his experiences as mental torture, and suffered some psychological harm, including instances of claustrophobia and memory loss. Moreover, after his release, he became security paranoid for some time, and was constantly conscious of being watched. He refused to use the telephone, and his house was repeatedly searched by the police, often in the middle of the night. Moreover, many friends and acquaintances distanced themselves from the family after his detention, as they were afraid to be associated with any organisation challenging the state. As a result of this, Van Wyk  joined the Detainee Parent Support Committee (DPSC). This organisation, which was connected to the United Democratic Front (UDF), provided an important source of support for those who the apartheid government had detained without trial.

Despite his detention and its adverse effects, Van Wyk continued to be politically active through the late 1980s and early 1990s. In addition to his roles with the DPSC, Cosatu, and Cahac, he became a member of the ANC after its legalisation in 1990. Moreover, he also became active in the South African Municipal Workers’ Union (Samwu) from its establishment in 1987, and was instrumental in a public meeting of this union, relating to a 13 day worker-initiated strike against the Cape Town municipalities in 1990. This strike was the first time in South Africa’s history that 11,000 workers, predominantly Coloured, participated in a strike of this nature. Furthermore, Cahac took a significant role in engaging civic organisations across South Africa for the creation of the South African National Civic Organisation (Sanco) in 1992, for which Van Wyk became a councillor from 1995-1996.

Through his involvement with Sanco, Van Wyk participated in a 1994 exchange programme for local government officials. For this programme, Van Wyk travelled to Ethiopia, Eritrea, Washington, Toronto, New York, Sao Paolo and Curitiba. He took part in a second exchange in 1997, during which he spent two months in San Diego, California, engaged in various talks with communities learning to establish social involvement with local governments.

Since the ending of the apartheid regime in 1994, and more particularly since joining the Gorachouqua House in 2003, Van Wyk has shifted his political focus to the cultural field, increasingly asserting his Khoi identity. He rejects a ‘Coloured’ identity, and specifically, he refers to himself as Nama, an ethnic group under the Khoi nation, the descendants of the indigenous peoples of South Africa. Having grown up in a short period of colonialism, and spent most of his life in the apartheid era, during which his family was forced to register as Coloured, he first came to acknowledge and assert a Khoi identity in 1985. Later, in meetings with ANC leadership, he repeatedly stressed the need to open the debate on Khoikhoi identity, but claims that in this, he was subtly marginalised and isolated.  His involvement with the Khoisan community deepened further when he joined the Khoi Gorachouqua House in 2003. Then, when Chief Harleen Sassman died in 2008, Van Wyk was appointed to lead the House, culminating in his formal appointment as Chief in a restoration ceremony on 10th June 2010.

Van Wyk is currently working towards recognition of Khoisan indigenous rights in South Africa, although his focus is on cultural recognition and promotion, as opposed to any ethnic division. He is keen to use research into Khoi history and identity, including various writings on early colonial explorations of South Africa, to work out a written history of its indigenous peoples, which he feels has heretofore been neglected and ignored. His central concerns – and the concerns of many of his contemporaries – centre on the recognition of land and language rights, which they believe to be central to Khoisan identity in post-apartheid South Africa. Such rights, he argues, should be granted to the Khoisan peoples under the UN declaration of 2007 on indigenous rights, which have not been fully implemented in South Africa. Along with various others, he is currently busy with a court case against the government for cultural genocide, although the case is struggling with a lack of financial resources, limiting its likelihood of success at present. Nevertheless, steps are now beginning to be taken towards the recognition of Khoisan identity in South Africa.