Johan Anthoniszoon van Riebeeck was born in Culemborg in the Netherlands on 21 April 1619, as the son of a surgeon. He grew up in Schiedam, where he married Maria de la Quellerie on March 28, 1649. The couple had eight sons, one of whom, Abraham van Riebeeck, became a Governor-General of the Dutch East Indies.

Van Riebeeck joined the Dutch East India Company and sailed to Batavia in April 1639 as an assistant surgeon, having learned the craft from his surgeon father. From there he went to Japan, and in 1645, Van Riebeeck was given charge of the company trading station at Tongking (Tonkin, now in Vietnam). Van Riebeeck was recalled from the post in Tongking by the Dutch authorities when it was discovered that he was conducting trade for his own account.

On his voyage back from Indochina, the ship stopped for 18 days in the sheltered Table Bay, near the Cape of Good Hope at the southern end of Africa. While there, van Riebeeck realized that the area could supply passing ships with fresh produce. His observations were not unique, as various ship's officers were recommending that the Dutch East India Company establish a way station for the arduous voyage from Europe to the East Indies to allow ships to take on fresh water, fresh food, offload the sick, and to make repairs to ships. 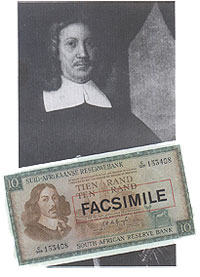 In fact, in March 1647 the Nieuw-Haerlem, a ship of the Dutch East Company's fleet, ran aground in Table Bay at the Cape. The stranded crew built a temporary fort, grew vegetables in the fertile soil, and made contact with the local Khoikhoi. After the survivors were picked up the following year, the Lords XVII of the DEIC asked two merchants, Leendert Jansz and Mathys Proot, to write a report on their experiences at the Cape. The Remonstrantie that they submitted in 1649 contained recommendations that impressed the Amsterdam Chamber of the DEIC. At the time there was increasing tension between the Netherlands and England, and they saw the far-flung Cape Peninsula on the sea route to the Indies as a practical, healthy and strategic area to take ownership of. The Lords XVII approved their proposal to establish a meeting place and fortress at the Cape.

In 1651, van Riebeeck was requested by the Dutch East India Company to undertake the command of the initial Dutch settlement in South Africa. Van Riebeeck was therefore assigned the task of establishing a ship refreshment post at the Cape of Good Hope at the southern end of Africa. On the April 6, 1652, Van Riebeeck landed at the Cape with 3 ships; the Reijer, the Dromedaris, and the Goede Hoop. He was accompanied by 82 men and 8 women, including his wife of two years, Maria. The fleet originally included five ships, but the Walvis and the Oliphant arrived late, having had 130 burials at sea.

The VOC had no desire for either the conquest or the administration of a territory in southern Africa. Their interest was to ensure the provision of vital supplies to their shipping fleets on their way to and from the Dutch East Indies. Van Riebeeck's specific instructions were not to colonize the Cape, but to build a fort, to erect a flagpole for signalling to passing ships, and to build pilot boats to escort passing ships safely into the bay.

The first wet winter in the Cape proved very difficult for these early settlers. People at the time lived in wooden huts, and therefore during the heavy rains 19 died, gardens were washed away, food supplies dwindled and few were fit enough to work. However, despite these early difficulties the Cape was producing enough fresh foodstuffs to supply any passing ship during its stay at De Kaap by 1659. They also obtained meat provisions through bartering and trade with the native Khoikhoi people.

It was known to van Riebeeck that wine, especially young red wine, sometimes carried on ships instead of water, could prevent scurvy. The Cape of Good Hope was considered a region favourable for growing wine, therefore when he set up the settlement he imported vine cuttings from Europe. The grapes from these vines were first pressed in the autumn of 1659.

As the demand for agricultural land, especially pastures grew continuously, and the settlement steadily spread from Table Bay towards the north and north-east. The Khoikhoi, disparagingly called Hottentots, were forced to recede although they increasingly resisted the expansion. In 1659, a Khoi uprising resulted in their complete defeat and forced them to retreat further to the north.

In the early days of settlement, company servants were prohibited from starting local industries and freedom of trade was forbidden because free enterprise was tied to the fortunes of the DEIC. Van Riebeeck had been writing reports recommending that 'free burghers' should be allowed to trade, farm and help with defence for some time. In February 1657, the DEIC issued the first permits to free nine company servants to farm along the Liesbeek River. In the same year slaves were imported from Batavia and Madagascar, as the need for labour increased dramatically as the port developed. When Van Riebeeck left the Cape in 1662, the little settlement numbered 134 officials, 35 free burghers, 15 women, 22 children, and 180 slaves.

As a result of the rapid expansion of the settlement, more settlers and immigrants from all over Europe began immigrating to South Africa. In 1688, a large group of French Huguenots fleeing religious persecution settled at the Cape.

As mentioned above, Van Riebeeck was commander of the colony at the Cape of Good Hope until 1662. After that, he was promoted to Secretary to the Governor-general of the Dutch East Indies and served there from 1665 to 1677. He never returned to live in the Netherlands. His wife, Maria, died in Malacca, which is now part of Malaysia, on 2 November 1664 at the age of 35 - enroute to van Riebeeck's new assignment. Van Riebeeck died in Batavia (now Jakarta) on the island of Java in 1677.

The "company gardens" where vegetables were grown, is now a park in the middle of Cape Town. In the Kirstenbosch Botanical Gardens in Cape Town, there is a wild almond hedge that was planted on van Riebeeck's orders as an outer barrier, and survives to this day. The initial fort was made of mud, clay, and timber, and had four corners, or bastions. The fort later became a pentagonal stone structure known as The Castle of Good Hope, or just The Castle. The Castle was built between 1666 and 1679; several years after van Riebeeck left the Cape. It has five bastions, and is made of brick, stone, and cement.

Van Riebeeck reported the first comet discovered from South Africa, C/1652 Y1, which was spotted on December 17, 1652. Similarly to many other charted comets, it has not returned to earth's view.

Jan Van Riebeeck's administration began a tradition in 1658, when he banished Autshumato, a Khoikhoi interpreter, to an island in Table Bay for his crimes against the Dutch authorities. The Dutch named it Robben Island, after the seals living there. Many years later, other political prisoners, including Nelson Mandela, would also be sent to Robben Island.