In 1936, faced with economic hardship, his family returned to India which was engaged in its own struggle for liberation. Babenia played an active role in the Indian Congress movement in Baroda, and served several terms of imprisonment in that country, before returning to Durban in October 1949, settling in Beatrice Street, Durban.

He began attending Natal Indian Congress (NIC) rallies in Durban. He joined the Natal Indian Youth Congress (NIYC) and later the NIC as a volunteer. Babenia worked as a journalist for the Gujarati section of Indian Opinion in 1960, but when that newspaper was shut down in 1961, he became an organiser for the NIC.

Babenia shared offices with Curnick Ndlovu at the New Age and sold the newspaper with Riot Mkwanazi who was later imprisoned on Robben Island as well.

In July 1962, Ronnie Kasrils approached Babenia, to join the African National Congress (ANC) military wing, uMkhonto weSizwe (MK) on the recommendation of M.D. Naidoo who knew him through his work at the Greyville branch of the NIC and was aware of his involvement in the liberation struggle in India.

The Durban Central cell met at Babenia’s North Street, Durban, home.  By this time Babenia had progressed to becoming a member of the Technical committee of MK.

One of their first successful attacks was the Victoria Street Bridge, which Ebrahim’s cell blew up on the evening of Sunday, 21 March 1962. They prepared the explosives at Natoo’s house. Perumal and Singh placed it on the railway tracks along Brook Street, while Ebrahim and Babenia worked on the cable on the Victoria Street Bridge. This was the main South Coast line that ran from Durban to Rossburgh and had high traffic volume. The attack also damaged the signalling gear. 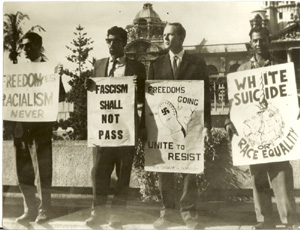 Babenia joined Ebrahim Ismail Ebrahim’s (Ebie) MK cell whose other members were Sunny Singh and David Perumal, both of whom  who were also recruited by Ebrahim.

Ebrahim’s cell attempted to bomb A.S. ‘Khosaan’ Kajee’s office in Alice Street. Durban on 14 October 1962. The bombing of his office was meant to deter him and others from participating in apartheid structures. However, the attack had to be aborted because they were disturbed by the night watch. They decided that since the explosives had been prepared, they would ‘blow up a train.’ They caught the 8:45 pm train to Effingham, and set off the petrol bomb near Duffs Road. The empty cabin caught on fire but there were no casualties.

Due to one of their number, Bruno Mtolo who was a security police spy, many activists, were held under the 90 day detention. Perumal, Kisten Doorsamy, Kisten Moonsamy, Emmanuel Isaacs, Sunny Singh and Babenia were arrested in quick succession.

He was detained under the 90-day law in 1963 and kept in solitary confinement in Pietermaritzburg.  On 25 November 1963 he, together with other members of his cell, was charged with sabotage, Babenia went on hunger strike protesting banning orders prohibiting his defence counsel from attending his trial.

Babenia appealed to the Minister of Justice on 26 August 1963 to be repatriated to India under the repatriation scheme for Indians in order to see his ailing mother who was 76 years of age. The appeal was denied.

He was held in isolation and tortured in detention. On 21 October 1963, Babenia was released from 90-day detention and charged under the Sabotage Act. The state threw the book at him and others and was determined to secure the harshest of sentences. Babenia was also accused of being part of Technical Committee.

The group of 19 was formally charged under the June 1962 Sabotage Act on 21 October 1963. They were accused of acting in common purpose to obtain explosives to violently damage the property of other persons and the State, and were charged with carrying out attacks using petrol bombs, pipe bombs, dynamite, and cutting instruments. Billy Nair and Curnick Ndlovu were additionally charged with being members of MK’s Regional Command, and Babenia of being part of its Technical Committee.

He was sentenced on 28 February 1964 to 16 years’ imprisonment on Robben Island and his leave to appeal refused.

In 1995, Babenia released his biography, which was titled "Memoirs of a Saboteur".

Natvarlal Dayalji “Natoo” Babenia passed away in Durban, KwaZulu-Natal, South Africa on 1 January 1999 at the age of 75.