The United Democratic Front (UDF) was an anti-apartheid body that incorporated many anti-apartheid organisations. It was launched in 1983, in Mitchells Plain.

Steps towards forming the UDF began in the late 1970s, and moved forward when Allan Boesak called for a 'united front' of 'churches, civic associations, trade unions, student organisations, and sports bodies' to fight oppression. He was addressing the Transvaal Anti-SAIC Committee (TASC) at a conference in Johannesburg on 23 January 1983, but this part of his speech was unplanned- and even he was surprised to see the result.

At the conference, the TASC leaders proposed that a committee be formed to look into the feasibility of such a front, and the committee asked to report back the next day. After heated discussions agreement was reached on how to go about forming such a front and what the front should look like. It was decided to join with organisations, on a regional and federal structure, as long as they were non-racist. The UDF had a Christian heritage, like the ANC, and in many ways looked like an internal wing of the ANC, but it did not associate with the armed struggle. The UDF character however changed in the mid-1980s with the people?s insurrection, and some organisations identifying with the UDF took a more militant path. A committee was formed to take the process of formation further. 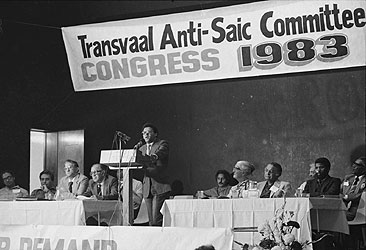 Rev. Alan Boesak, speaking at the Transvaal Anti-SAIC Commitee, at which he first mooted the formation of the United Front. © Omar Badsha, SAHO

The next step was to establish regional committees to consult with organisations in that region. In May the Natal UDF region was launched, followed by the Transvaal in June and the Western Cape in July. A new Interim National Committee was formed with members from each region, which also included more black and white activists. An important two-day planning meeting was held by the committee at the end of July in Johannesburg, and was also attended by Albertina Sisulu, Mewa Ramgobin and Steve Tshwete. The committee discussed when to launch the UDF and, although they felt they still needed time to organise structures, decided on 20 August as the government would introduce the Tricameral legislation in August. This left the committee with only three weeks before the launch. They discussed basic principles and documents, and decided on a logo and slogan - 'UDF Unites, Apartheid Divides'.

It was also decided that groups working with government structures, those working with homeland state structures and groups that broke sport and cultural boycotts would not be allowed to join. 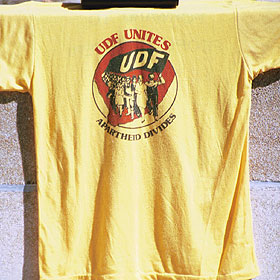 The first stage of the launch was a conference of delegates, which was followed by a public rally. On 20 August 1983 the UDF was formed in a community hall in Rocklands, Mitchells Plain in Cape Town. Frank Chikane, who had played an important role in the preparations for the formation of the UDF, was the first major speaker. Chikane spoke of the day as being a turning point in the struggle for freedom. The keynote speaker, Boesak, spoke of bringing together a wide range of groups and unity among those fighting for freedom. A list of tasks was drawn up, focusing on organisation building and highlighting the aim of being an organisation to represent all parts of the population.

In the afternoon, the conference closed and the public rally began. The doors were opened to allow in members of the public, with a marquee outside the hall to contain the overflow of the approximately 10 000 people who attended the meeting. Loudspeakers and video-screens relayed the proceedings from the hall into the tent. Frances Baard opened the rally, and successive speeches focused on Charterism. What was significant about the day was the amount of support from different organisations. Delegates of 565 organisations attended the launch, and 400 of these were already affiliates on a regional level. The immediate reason for the formation of the UDF was to fight the introduction of the Tricameral Parliament. 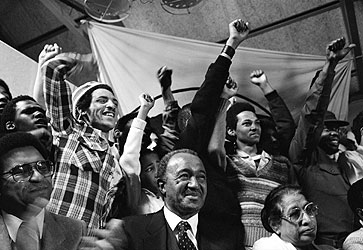 However, the formation was actually the result of changes that had been taking place on a social, economic and political level since the Soweto Uprising. A new, more militant culture had emerged, that led to the formation of many civic, youth, student, worker, women and other organisations. There was also increased support for Charterism and a move towards mass organisation. In the immediate post-Soweto period, amid government suppression, growing curiosity among the urban black and growing political awareness, study groups began to develop in townships across the country. Some of these were very informal and were merely a group of young people gathering to discuss ideas. Others, such as one led by Joe Gqabi in Soweto, were more formal and focused more on Charterist ideals and read ANC literature. These groups spread ideas, got new people involved and spread into other circles. Initially the study groups had little or no contact with each other. In the late 1970s there were some attempts to get groups to unite, and in 1979 Popo Molefe and Vincent Mogane launched AZAPO in Soweto, with Molefe calling for a front in Soweto to unite AZAPO, COSAS, trade unions and other organisations. This was unsuccessful, and although Molefe left AZAPO, he continued to call for united resistance in the early 1980s. At the same time, the ANC started realising the need for a broad organisation based inside South Africa, united in their opposition to apartheid. These developments culminated in the formation of the UDF in 1983.